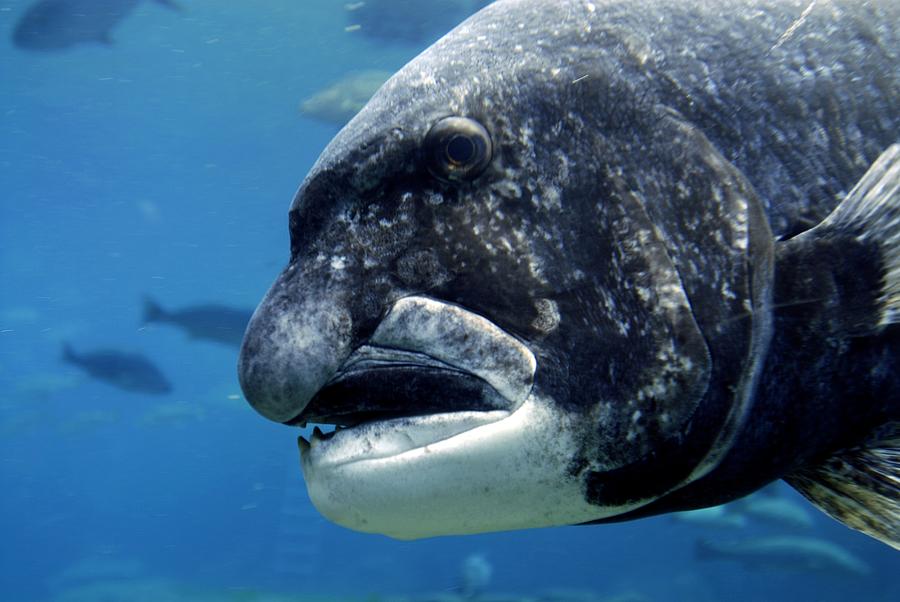 A real emergency: unsustainable fishing
Unsustainable fishing is not just affecting cod and tuna populations – unsustainable and over-exploitation of the Africans Black Musselcracker is playing a pivotal role in reducing populations all over the Eastern Cape. In this Friday’s endangered species article we focus on a rather unusual and rather comical marine character commonly known as the Black Musselcracker. Listed as [vulnerable] the species was generically identified as Cymatoceps nasutus back in back in 1861 by British born François Louis Nompar de Caumont La Force, comte de Castelnau (25 December 1810 – 4 February 1880) was a French naturalist, known also as François Laporte or Francis de Castelnau.

.
Endemic to South Africa, found from Cape Agulhas, Western Cape, to St Lucia in KwaZulu-Natal, it is a large solitary fish found on rocky reefs to a depth of about 80 meters. The species is also known to occur in Mozambique too where fishing is quite rampant in the area. Species populations are decreasing at a rapid pace now of which over-fishing has been the major player seeing populations decline from Atlantic, Southeast, Indian Ocean and western which are known as “Fishing Marine Areas“.

Cymatoceps nasutus was heavily exploited throughout the 20th century which has led to a decrease in abundance and mean size. Resesarcher have stated that the largest decrease has been noted in the KwaZulu-Natal fishing areas. However, as a formal stock assessment has not been undertaken this cannot really be stated as one hundreds per cent factual.Marine scientists have suggested that some 20 55% of the population has vanished of which meets the criteria for vulnerable. A slight increase in population sizes has been noted within the Tsitskamma National Park from 1998-2005.

However event this figure should be reviewed with “cation” as its quite likely the species may have plummeted furthermore. There was little change in total commercial catch between 1930–1933 (10 tonnes) and 1986–1987 (12 tonnes) in KwaZulu-Natal. However, the total reported commercial catch for this species has declined from a peak of 25 tonnes in 1987 to less than four tonnes in 2003–2007 which is “concerning”. The trend in catch composition is also thought to have declined in KwaZulu-Natal similarly to other large, slow growing, endemic sparids. A significant decline in catch composition was recorded in the Transkei between 1984 and 1992 due to voluntary cessation of catch by commercial fishers. Male to female sex ratios in the Eastern Cape were reported to be strongly biased in favour of females (1:6). Commercial data show that since 2000, commercial fishing effort has declined dramatically in the South African line-fishery from approximately 3,000 to 450 vessels, in line with the long-term fisheries rights allocation process implemented in 2006 (Department of Agriculture, Forestry and Fisheries 2012).

Trade history
We do ask that all “non-commercial and commercial fishers” to please read and understand the following data, take note of it and please fish for other catches that are in higher numbers not classed as “vulnerable or endangered”. Unsustainable fishing will if not decreased unfortunately see this species decline furthermore.

2. This species is sought after by recreational fishers but is of little commercial importance due to its low abundance, except in the Transkei where it comprised ~16% of total commercial landings in the Coffee Bay linefishery in 1985.

3. In 1992, this figure dropped to less than 1%, which is most likely due to a voluntary abeyance of catch by commercial fishers

Threats
Cymatoceps nasutus is extremely vulnerable to overexploitation due to its life history characteristics, including high residency, slow growth, late maturity, longevity, and hermaphroditism. Their aggressive nature as dominant reef predators further accentuates their vulnerability to capture. Male and female sex ratios are heavily biased towards females, which is exacerbated by the removal of large males from the population. Although not known, it is suspected that females may be changing sex at a smaller length and a younger age as a result of overexploitation.