The oceans play a critical role in controlling the climate by storing large quantities of carbon in the interior, far from the surface. Critical for deep-ocean carbon storage are the biological processes that transport organic matter from the surface ocean to depth. Aggregates of organic matter that sink out of the sunlit surface ocean are called “marine snow,” and they feed the organisms that live below. The size, rate of sinking, and interaction of marine snow with deep-sea organisms determine how much carbon is stored in the oceans and how long it remains there. Not only do organisms feed on marine snow, but they break particles up, convert parts of them into carbon dioxide, and also produce some snow themselves. Understanding these processes is therefore important to understanding the ocean carbon cycle and how it regulates atmospheric carbon dioxide concentrations.

Scientists have traditionally collected marine snow using sediment traps, but the information gained by this sampling method covers only limited areas and time periods. New technologies that focus on optical measurements allow the collection of large data sets describing the types of particles and the frequencies with which they occur. Optical devices are incredibly powerful and provide novel insights into the marine ecosystem. The Scientific Committee on Oceanic Research (SCOR) funded a new working group to take advantage of the rapid developments in optical technologies and to make them more accessible to the global community. This working group, Translation of Optical Measurements into particle Content, Aggregation and Transfer (TOMCAT), met for the first time last September at the National Oceanography Centre in Southampton, UK.

During the meeting, members were refreshingly honest in highlighting the capabilities of current devices and knowledge gaps. The overall conclusion was that optical devices are incredibly powerful and provide novel insights into the marine ecosystem. 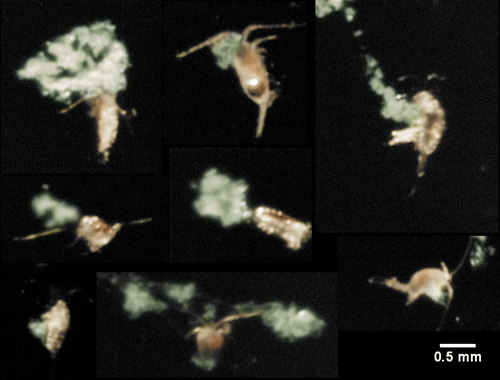 Optical techniques detect “particles” that include not only marine snow but also organisms such as copepods (small crustaceans) or jellyfish.  Optical particle-sensing devices can be used from ships or installed on remote platforms, enabling them to be used over wide areas and long periods of time. Meeting participants discussed how each type of instrument system offers advantages and limitations. High-resolution camera systems enable scientists to perform detailed particle classification and to directly observe interactions of copepods with marine snow. Laser systems do not allow scientists to identify particles to a detailed level, but they enable fast data processing. Widely used, simple optical sensors (such as backscattering sensors or fluorometers) provide less classification information, but they currently offer the highest temporal and spatial resolution. Large optical data sets promise unprecedented insight into interactions among organisms and particles and into ecosystem dynamics. The large optical data sets that have been (and will be) collected promise unprecedented insight into interactions among organisms and particles and into ecosystem dynamics, speakers at the meeting indicated. However, the images that we currently collect do not allow us to determine the masses and sinking speeds of submerged particles. Here discussion with modelers in the community proved useful. For example, modelers pointed out that detailed particle aggregation models could help to identify which optical properties best relate to sinking speed.

TOMCAT’s next steps include a review of current devices and methods, determination of key particle properties to be measured, evaluation of techniques for converting optical observation into particle properties, recommendations of how to improve our understanding of the relationships between these properties, and promoting the sharing of software and data.TOMCAT’s next meeting will be in summer 2017, and a conference session is planned for the 2018 Ocean Sciences Meeting. Anyone interested in TOMCAT is encouraged to contact the author of this report. TOMCAT is funded by SCOR. Facilities for the meeting were provided by the National Oceanography Centre, Southampton. The author’s time on TOMCAT is supported by Natural Environment Research Council National Capability funding.