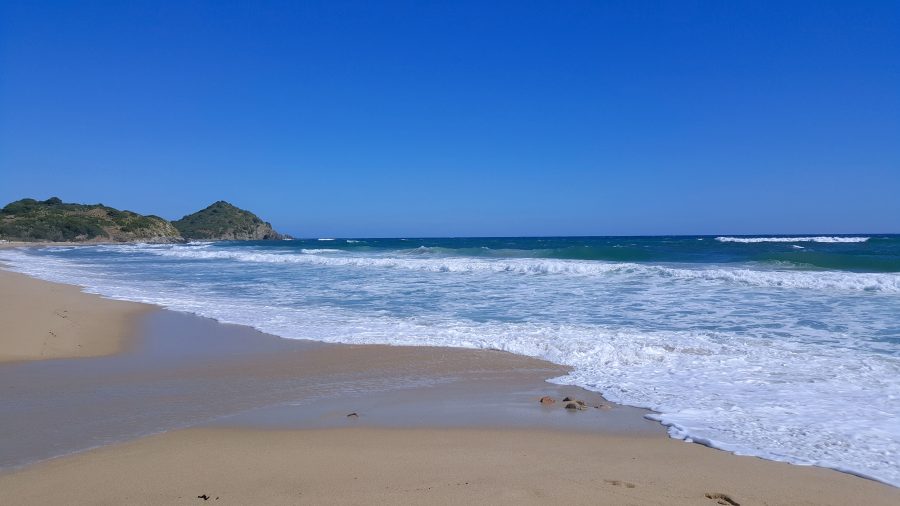 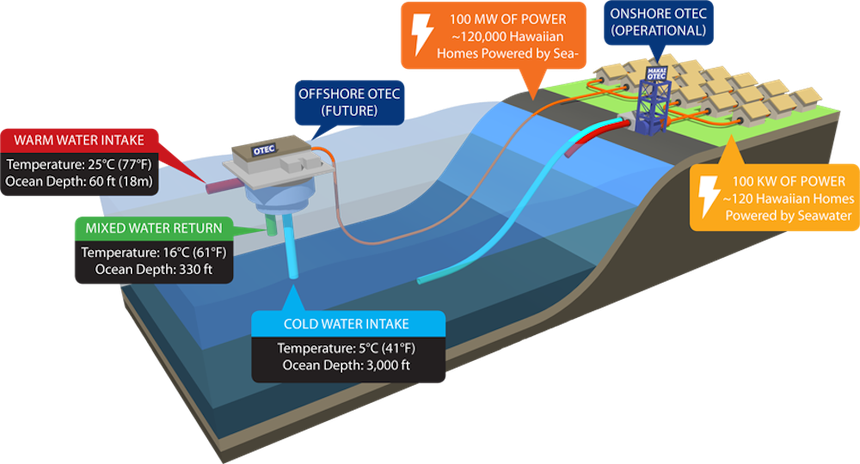 Tuttavia, la profondità selezionata per lo scarico dell’effluente del condensatore OTEC ha di gran lunga l’impatto maggiore.
,
Abstract
A simple algorithm previously used to evaluate steady-state global Ocean Thermal Energy Conversion (OTEC) resources is extended to probe the effect of various effluent discharge methodologies. It is found that separate evaporator and condenser discharges potentially increase OTEC net power limits by about 60% over a comparable mixed discharge scenario. This stems from a relatively less severe degradation of the thermal resource at given OTEC seawater flow rates, which corresponds to a smaller heat input into the ocean. Next, the most practical case of a mixed discharge into the mixed layer is found to correspond to only 80% of the so-called baseline case (mixed discharge at a water depth of initial neutral buoyancy). In general, locating effluent discharges at initial neutral-buoyancy depths appears to be nearly optimal in terms of OTEC net power production limits. The depth selected for the OTEC condenser effluent discharge, however, has by far the greatest impact. Clearly, these results are preliminary and should be investigated in more complex ocean general circulation models.

Introduction
Systematic analyses of large-scale Ocean Thermal Energy Conversion (OTEC) impacts and their possible feedback effects on the size of global OTEC resources have been few probably for two main reasons. On one hand, it is a dauntingly complex problem to tackle, even with the recent availability of massive computing capabilities; simplifying the modeling framework may prove expedient, but excessive simplifications also introduce limitations and are likely to cast doubts on any result. More importantly, the urgency of solving such a problem is bound to seem remote given the very slow pace of development afflicting OTEC technologies. From environmental and permitting perspectives, however, one should recognize an increasing tendency to expect a grasp of large-scale impacts for any given technology, even if a specific project is small and isolated. The analysis of the impacts of large-scale OTEC development using a locally one-dimensional (1-D) framework was spearheaded by Martin and Roberts for the Gulf of Mexico [1], when computing capabilities were very limited; the reduction of a fully three-dimensional problem was more easily justified in this case of a semi-enclosed body of water. Drawing on experience acquired with one-dimensional oceanic models applied to a newly proposed geo-engineering concept at global scales [2,3], the deep ocean sequestration of anthropogenic carbon dioxide, Nihous later probed the issue of large-scale OTEC resources with similar models [4,5,6]. The limitations of this approach were never in doubt, since horizontal transport phenomena are dominant in the ocean, and the situation far more complex than represented in simple advection-diffusion models of the oceanic water column. In the absence of any rational method to assess global OTEC resources, though, the motivation for such studies was to be able to provide a starting point for future, more elaborate analyses, while identifying possible qualitative features of large-scale OTEC impacts, including self-limiting modifications of the vertical thermal structure of the ocean.

Studies of large-scale OTEC development using state-of-the-art three-dimensional (3-D) ocean general circulation models were initiated more recently [7,8,9] and provided significant additional insight toward the evaluation of sustainable OTEC resources, and of the potential large-scale environmental effects associated with the widespread implementation of the OTEC technology. They were able, in particular, to predict geographically differentiated effects that a one-dimensional model cannot address. Even with this more sophisticated and numerically intensive work, however, many issues remain to be addressed in order to gain further confidence in the results. In the most recent attempt to improve the underlying modeling protocol, for example, a low-complexity atmospheric model was coupled with a previously selected oceanic general circulation model to better represent feedback effects between ocean and atmosphere [10].

A somewhat surprising result from the much more complex analyses was that many predicted qualitative features were also apparent from the simple 1-D models, among which the existence of a steady-state (asymptotic) global OTEC net power maximum primarily caused by an accumulation of heat in the mid-depth water column. In both classes of models, and for various OTEC scenarios, the temperature profiles in the OTEC region, at maximum net power output, share many similarities, including, in particular, the amount of warming around the deep cold seawater intake depth in the OTEC region. As a result, maximum OTEC net power essentially remains proportional to deep seawater intake flow rate (or equivalently, nominal OTEC power, if there were no seawater temperature changes), with a value of the order of 0.20 TW Sv−1 (one terawatt is 1012 W, and one sverdrup is 106 m3 s−1); this also corresponds to a net power ratio of about 45% (i.e., power produced over nominal power). What mainly differentiates the ‘bulk’ output from all models and scenarios so far is the magnitude of the overall OTEC deep cold seawater flow rate at which OTEC net power would peak. In one-dimensional models, it basically takes much smaller OTEC seawater flow rates to modify the existing seawater temperature profiles. These points can be appreciated in Figure 1, where the output of the most basic steady-state 1-D model has been adapted ‘locally’ to every 1 degree by 1 degree (latitude-longitude) cell of the OTEC region [4]; the precise definition of the OTEC region, as well as the OTEC warm-to-cold seawater flow rate ratio (1.5 here, instead of 2) and net power formula were adapted for comparison to the most recent 3-D study [10]. 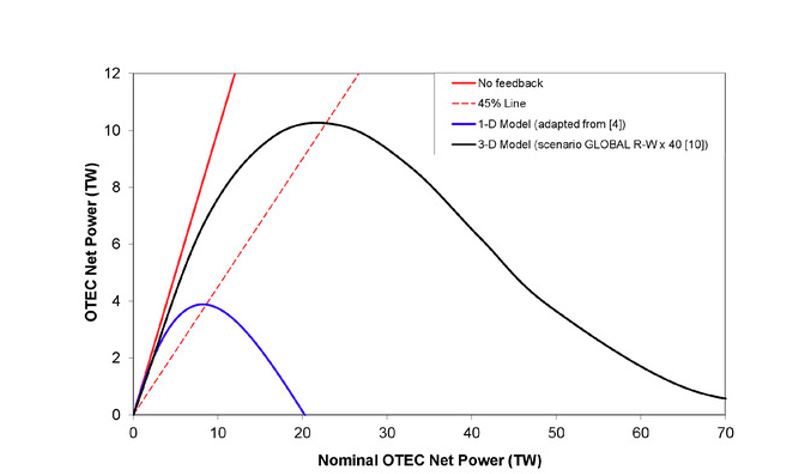 What all large-scale OTEC studies to date have shared is the protocol for effluent discharge. The initial 1-D analyses called for a mixed-effluent discharge at a water depth where the released water would be neutrally buoyant in the unperturbed ocean (i.e., without temperature changes) [4,5]. No rationale was explicitly given. The same discharge method was used in the more elaborate 3-D work, although it was recognized that an actual effluent discharge would likely occur in shallower waters, but that the ensuing plume effects (sub-grid sinking and turbulent mixing) could not adequately be captured in the ocean general circulation model at selected grid resolutions [7,8]; this also was consistent with running the numerically less intensive hydrostatic version of the 3-D code, where the vertical momentum equation is reduced to a hydrostatic balance. In a later study, the discharge protocol was described as a choice “with little loss of generality [9]”, which may well turn out to be an incorrect statement.

While care was taken to avoid plume effects with OTEC effluents, other studies were conducted with similar modeling tools to investigate artificial upwelling, where convective mixing cannot be avoided since denser water is brought to shallower depths by design [11,12]. Even though the same caveats would apply, it was demonstrated at least that stable steady-state temperature profiles are obtained following artificial upwelling (while convective mixing schemes are used for transient calculations). Therefore, there is little reason not to contemplate alternative OTEC effluent discharge scenarios, at least from a steady-state (sustainable) perspective. This allows, in particular, the consideration of what is believed to be the most practical OTEC effluent discharge scenario, i.e., within (or just below) the oceanic mixed layer [13]. Also, the option of locating the OTEC condenser and the cold seawater ducting at depth has been proposed for some time [14,15,16], to eliminate the need for a large and costly pipe extending from the cold seawater withdrawal depth to the surface. Although detailed designs are lacking for such a concept, with serious engineering challenges of its own, implementing OTEC with a deep condenser certainly would require the cold effluent discharge to be treated separately.

The preliminary analytical evaluation of alternative OTEC effluent discharge schemes described below is based on a simple but numerically efficient 1-D algorithm [4]. The model, described in Section 2, is an extension of the published version that allows the possibility of separate OTEC evaporator and condenser discharges. Results are given in Section 3, where on one hand, mixed and separate OTEC discharges are compared, and on the other hand, more practical cases of mixed or evaporator effluent discharges in shallow water are also considered.
– 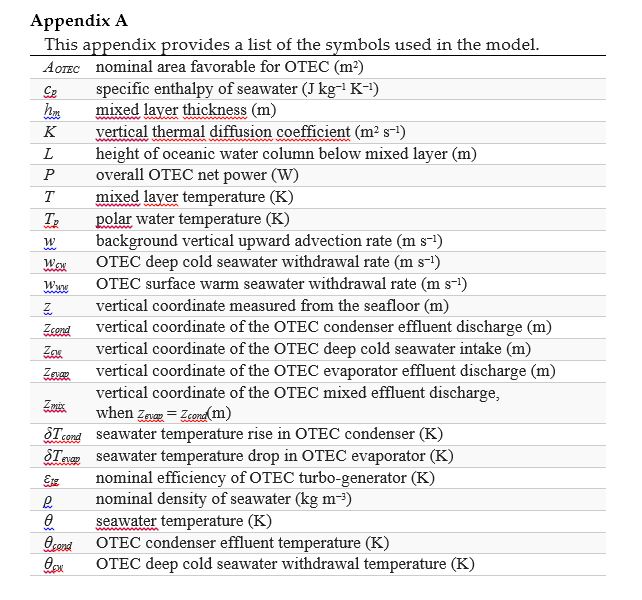 © 2018 by the author. Licensee MDPI, Basel, Switzerland. This article is an open access article distributed under the terms and conditions of the Creative Commons Attribution (CC BY) license (http://creativecommons.org/licenses/by/4.0/).