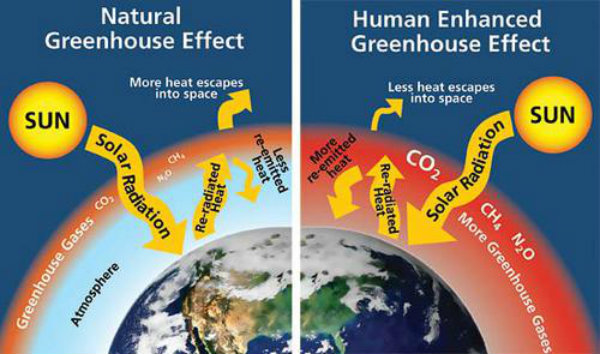 Skeptics of manmade climate change offer various natural causes to explain why the Earth has warmed 1.4 degrees Fahrenheit since 1880. But can these account for the planet’s rising temperature? Scroll down to see show how much different factors, both natural and industrial, contribute to global warming, based on findings from NASA’s Goddard Institute for Space Studies.

Is It the Earth’s Orbit?
The Earth wobbles on its axis, and its tilt and orbit change over many thousands of years, pushing the climate into and out of ice ages. Yet the influence of orbital changes on the planet’s temperature over 125 years has been negligible.

Is It the Sun?
The sun’s temperature varies over decades and centuries. These changes have had little effect on the Earth’s overall climate.

Is It Volcanoes?
The data suggest no. Human industry emits about 100 times more CO2 than volcanic activity, and eruptions release sulfate chemicals that can actually cool the atmosphere for a year or two.

Is it All Three of These Things Combined?
If it were, then the response to natural factors should match the observed temperature. Adding the natural factors together just doesn’t add up.

So If It’s Not Nature, Is It Deforestation?
Humans have cut, plowed, and paved more than half the Earth’s land surface. Dark forests are yielding to lighter patches, which reflect more sunlight—and have a slight cooling effect.

Or Ozone Pollution?
Natural ozone high in the atmosphere blocks harmful sunlight and cools things slightly. Closer to Earth, ozone is created by pollution and traps heat, making the climate a little bit hotter. What’s the overall effect? Not much.

Or Aerosol Pollution?
Some pollutants cool the atmosphere, like sulfate aerosols from coal-burning. These aerosols offset some of the warming. (Unfortunately, they also cause acid rain.)

No, It Really Is Greenhouse Gases. 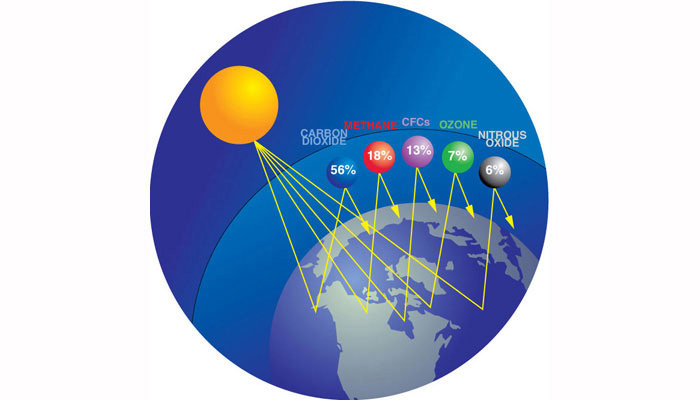 Atmospheric CO2 levels are 40 percent higher than they were in 1750. The green line shows the influence of greenhouse gas emissions. It’s no contest. Greenhouse gases warm the atmosphere. Aerosols cool it a little bit. Ozone and land-use changes add and subtract a little. Together they match the observed temperature, particularly since 1950.

Compare and Contrast
Putting the possible natural and human causes of climate change alongside one another makes the dominant role of greenhouse gases even more plainly visible. The only real question is: What are we going to do about it?

Researchers, who study the Earth’s climate, create models to test their assumptions about the causes and trajectory of global warming. Around the world there are 28 or so research groups in more than a dozen countries who have written sixty one climate models. Each takes a slightly different approach to the elements of the climate system, such as ice, oceans, or atmospheric chemistry. The computer model that generated the results for this graphic is called “ModelE2,” and was created by NASA’s Goddard Institute for Space Studies (GISS), which has been a leader in climate projections for a generation. ModelE2 contains something on the order of 500,000 lines of code, and is run on a supercomputer at the NASA Center for Climate Simulation in Greenbelt, Maryland.

A Global Research Project
GISS produced the results shown here in 2012, as part of its contribution to an international climate-science research initiative called the Coupled Model Intercomparison Project Phase Five. Let’s just call it “Phase-5.”
Phase-5 is designed both to see how well models replicate known climate history and to make projections about where the world’s temperature is headed. Initial results from Phase-5 were used in the 2013 scientific tome published by the Intergovernmental Panel on Climate Change. There are more than 30 different kinds of experiments included in Phase-5 research.

These tests address questions like, what would happen to the Earth’s temperature if atmospheric carbon dioxide suddenly quadrupled? Or, what would the world’s climate be like through 2300 if we keep burning fossil fuels at the current rate? Phase-5 calls for a suite of “historical” experiments. Research groups were asked to see how well they could reproduce what’s known about the climate from 1850-2005. They were also asked to estimate how the various climate factors—or “forcings”—contribute to those temperatures. That’s why this graphic stops in 2005, even though the GISS observed temperature data is up-to-date. The years 2005-2012 were not a part of the Phase-5 “historical” experiment.

What the Lines Show
The black “observed” line is the GISS global land and ocean temperature record, which can be found here. It starts in 1880. The colored temperature lines are the modeled estimates that each climate factor contributes to the overall temperature. Each factor was simulated five times, with different initial conditions; each slide here shows the average of five runs. GISS researchers laid out their historical simulations in detail last year in this article. The modeled years 1850-1879 from the Phase-5 “historical” experiment are not shown because the observed data begins in 1880.

Confidence Ranges
Researchers do not expect their models to reproduce weather events or El Niño phases exactly when they happened in real life. They do expect the models to capture how the whole system behaves over long periods of time. For example, in 1998 there was a powerful El Niño, when the equatorial Pacific Ocean warms ( we’re in another one of that scale now). A simulation wouldn’t necessarily reproduce an El Niño in 1998, but it should produce a realistic number of them over the course of many years. The temperature lines represent the average of the model’s estimates. The uncertainty bands illustrate the outer range of reasonable estimates. In short, the temperature lines in the modeled results might not line up exactly with observations. For any year, 95% of the simulations with that forcing will lie inside the band.

Data
The raw observational and model data can be downloaded here:

Acknowledgments
Many thanks to Kate Marvel and Gavin Schmidt of NASA-GISS.