How citizen science changed the way Fukushima radiation is reported via National Geographic / February 13, 2016 / for full article follow this link

“It appears the world-changing event didn’t change anything, and it’s disappointing,”said Pieter Franken, a researcher at Keio University in Japan (Wide Project), the MIT Media Lab (Civic Media Centre), and co-founder of Safecast, a citizen-science network dedicated to the measurement and distribution of accurate levels of radiation around the world, especially in Fukushima. “There was a chance after the disaster for humanity to innovate our thinking about energy, and that doesn’t seem like it’s happened.  But what we can change is the way we measure the environment around us.” 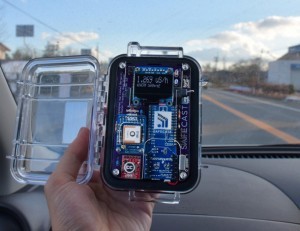 Franken and his founding partners found a way to turn their email chain, spurred by the tsunami, into Safecast; an open-source network that allows everyday people to contribute to radiation-monitoring. “We literally started the day after the earthquake happened” revealed Pieter.

On April 15, the group that was to become Safecast sat down together for the first time. Ozzie conceived the plan to strap a Geiger counter to a car and somehow log measurements in motion. This would became the bGeigie, Safecast’s future model of the do-it-yourself Geiger counter kit. Armed with a few Geiger counters donated by Sythe, the newly formed team retrofitted their radiation-measuring devices to the outside of a car.

Safecast’s first volunteers drove up to the city of Koriyama in Fukushima Prefecture, and took their own readings around all of the schools. Franken explained, “If we measured all of the schools, we covered all the communities; because communities surround schools. It was very granular, the readings changed a lot, and the levels were far from academic, but it was our start. This was April 24, 6 weeks after the disaster. Our thinking changed quite a bit through this process.”

Since their first tour of Koriyama, with the help of a successful Kickstarter campaign, Safecast’s team of volunteers have developed the bGeigie handheld radiation monitor, that anyone can buy on Amazon.com and construct with suggested instructions available online. So far over 350 users have contributed 41 million readings, using around a thousand fixed, mobile, and crowd-sourced devices.

According to Franken, “We’re working with communities to install these sensors in people’s neighborhoods. We’re financed by donations only. We get donations so we put together a plan, volunteers provide space, and Internet access, and agree that the data collected are public”. What we’ve come to determine in Fukushima is that radiation levels are spotty. They can vary from street corner to street corner. We’ve also been able to determine that the levels over the last five years have reduced, partly because of half life of cesium, and because of environmental factors. We’ve also seen an increase in official government data being released in a similar style to Safecast’s drive-by method versus spot checking.

According to Franken, “There is no safe dose of radiation as it’s debated by scientists; the higher the level, the higher the risk is that it will trigger a cancer. Though, at low levels the risk is much smaller, it is not zero. However, irrespectively of what we do, we will all be exposed to naturally occurring radiation. This varies worldwide a little, but in general you could say that if you’re exposed to those levels you’re not worse off than anywhere else. That level,” he says, “is somewhere between 5 – 3 uSv/hr.” 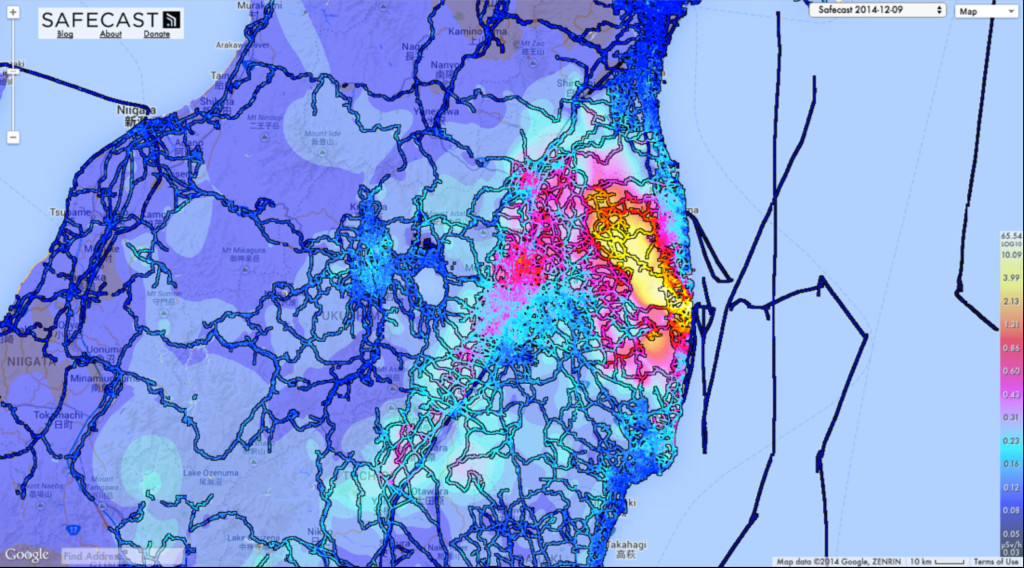 “When Fukushima happened all of my education led to this moment,” said Joe Moross, a Tokyo-based radiation and environmental sensor engineer with 35 years of experience in radiation and environmental sensing in the U.S. and Japan. He has voluntarily driven and measured over 50,000 km [31,000 miles]. “I fit in this crisis better than I have ever before. Being trained in nuclear physics, and sensor technology, this is what I’ve been made for. One of the biggest problems in Fukushima is the anxiety and the uncertainty that people are suffering from the incident. I think what were doing is trying to alleviate that by giving them ways to educate themselves about the problem and giving them solutions where they can be empowered to do something about it, as a opposed to just going along with the current of the crisis.”

The Question is .. how much radiation has been released (still is) and what are their effect?
The first Fukushima  annual review meeting was held in August 2012 and demonstrated that a strong Pacific current, known as the Kuroshio Current, was transporting the radioactive substances across the Pacific Ocean towards North american coastlines. However, initial evaluation extimated that the concentration of radioactivity was not as high as thought. The ocean had diluted it substantially so radioactivity remained at low levels but there was still concern over contamination of seafood. A marine monitoring project was established to ensure that the seafood of the region was safe for human consumption. This is still a clear danger to be exploited.