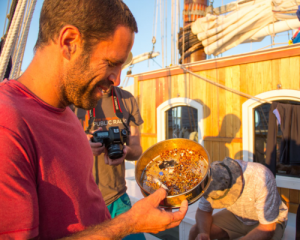 Less than 100 nautical miles south of Bermuda there is the same sharp rise in microplastic pollution. The seas are eerily calm, and we can see the surface of the ocean peppered with plastic. We saw the same thing exactly 5 years ago when we began the 5 Gyres Expeditions around the world. Now, 50,000 miles later, we’re back where we started and the science and solutions are even more clear. The science tells us that plastic objects in the ocean drift to the subtropical gyres, shred to microplastics, and sink to deeper currents and the seafloor worldwide – it’s most akin to a plastic smog, like the smog that plagues big cities, swirls with atmospheric currents, and slowly settles closer to the us. Microplastic is the same thing. People could look up at smog in the air and say, “We can only clean that up by stopping the pollution in the first place,” so companies made better car mufflers and scrubbers on smoke stacks at power plants. They controlled emissions and it worked beautifully. Those people who suggested using butterfly nets to scoop air pollution out of the sky, or vacuum cleaners on top of skyscrapers, were sent to the loony bin. As recent as 5 years ago the world still believed media-sensationalized images of mythical islands of trash or static garbage patches of plastic in the ocean.

But you can’t look out to the ocean and see the reality of the problem. These myths spawned fanciful engineering solutions to go get it, like circular islands pulled by kites that scooped trash, or contraptions with 1km-wide booms that directed drifting plastic to a floating conveyor belt. These ideas, and their inventors, typically have no time at sea to test their ideas or themselves. On the contrary, it is safe to say that just about all marine scientists that have been to sea understand that a techno-fix to grab trash from the ocean is an unrealistic solution. Here’s why:

A mapping of the plastic smog pervading our oceans

1.     There’s plenty of by-catch that kills ocean life. When fishermen net the sea indiscriminantly, they catch and kill marine life they don’t want.  Most schemes to sieve the ocean for plastic will capture and kill marine life, especially big nets.

2.     Ocean recovery is an attempt to capture plastic after it has already affected marine life rather than focusing on river mouths or further upstream where the ecological impacts can be minimized.

3.     Recovery methods do stop the flow of plastic from countries with poor waste management or microplastics from storm water or sewage effluent.

4.     Recovery schemes misdirect vital funds. Cleanup projects take the limited funding coming from good-hearted global citizens and directs it away from campaigns to drive upstream changes in product design and producer responsibility, which are the long-term solutions we need.

5.     The ocean is resilient and will kick out plastic once new pollution stops. One great example is the rapid reduction in balls of tar drifting in the ocean soon after international law prohibited oil tankers from rinsing out the inside of their ships into the sea. The ocean kicked out the tar. It will do the same with plastic if the input is stopped.

It takes public commitment to upstream solutions, rather than nonsensical contraptions to capture trash at the end of the line. Hats off to the engineering minds that want to help, but ask marine scientists where to start- you’ll ensure impact that way.

NOTE by  Ocean4future.org
we publish all the opinions even if debatable to assure you a full understanding of the problem … Make up your mind