How Is Fukushima’s Fallout Affecting Marine Life? By David Pacchioli

The Fukushima nuclear disaster delivered an unprecedented amount of radioactivity into the sea over a relatively brief time. How did that pulse of cesium and other radioisotopes make its way through the marine food chain? Scott Fowler, who helped pioneer marine radioecology for more than 30 years at the International Atomic Energy Agency’s Marine Environment Laboratories, offered a primer on the subject at the Fukushima and the Ocean Conference in Tokyo in November 2012.

Mechanism: The food chain starts with marine phytoplankton—microscopic plants that account for as much photosynthesis as plants on land. These organisms take up radioactive contaminants from the seawater that surrounds them. As the phytoplankton are eaten by larger zooplankton, small fish, and larger animals up the food chain, some of the contaminants end up in fecal pellets or other detrital particles that settle to the seafloor. These particles accumulate in sediments, and some radioisotopes contained within them may be remobilized back into the overlying waters through microbial and chemical processes.“Polonium is responsible for the majority of the radiation dose that fish and other marine organisms receive,” he said. 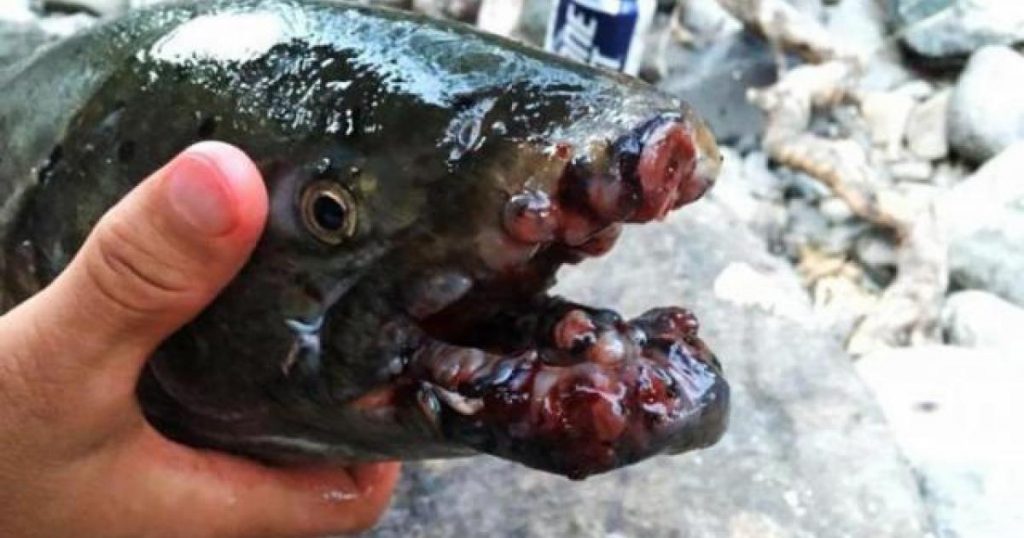 How much radioactivity gets into marine life depends on a host of factors: How long the organisms are exposed to radioactivity is certainly important, but so too are the sizes and species of the organisms, the radioisotopes involved, the temperature and salinity of the water, how much oxygen is in it, and many other factors such as the life stage of the organisms. In all this, Fowler said, it’s important to remember the omnipresence of natural background radiation. Polonium-210 and potassium-40 are naturally occurring radioisotopes in the ocean, for example. Potassium-40 is the most abundant radioisotope in the ocean, but polonium-210 accumulates more readily in marine organisms.

Another cross-species comparison showed that organisms took up different amounts of radioactivity depending on which particular radioisotopes were out there, he said. Radioisotopes are also transferred to marine organisms from contaminated sediments—once again in ways that display a complex range of factors, Fowler noted. In one experiment measuring uptake of americium, worms exposed to contaminated sediments took up significantly more of the radioisotope than clams did. But both worms and clams took up much more of the radioisotopes from Pacific sediments, which contain relatively high amounts of silica minerals, than they did from Atlantic sediments, which contain more carbon minerals. 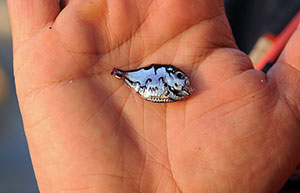 Food is another pathway into marine organisms and “may be in some cases the most important factor in uptake,” Fowler said. Consumed radioisotopes are assimilated internally through the gut, potentially a far more efficient route than if they are absorbed externally from the environment.

Marine invertebrates, such as bottom-dwelling starfish and sea urchins, are particularly proficient at absorbing a wide range of ingested radioisotopes, he said, but fortunately, they lose that incorporated radioactivity over time, via excretion. 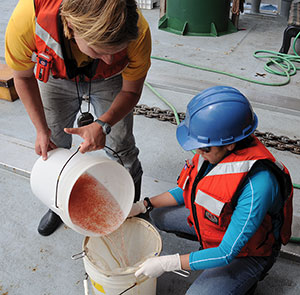 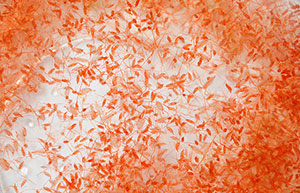 On an expedition in June 2011, biologists collected samples of phytoplankton, zooplankton (bottom), and fish, including the tiny hatchetfish (top), to learn if radioisotopes from Fukushima were accumulating in marine life. (Photos by Ken Kostel, Woods Hole Oceanographic Institution)

From plankton to tuna
Fowler’s longtime colleague, Nicholas Fisher, zeroed in on the isotopes that have had the most impact from Fukushima. Fisher, a marine biogeochemist at Stony Brook University, has spent 35 years studying the fate of metals and radioisotopes in marine organisms, including radioisotopes associated with nuclear waste. He and members of his lab participated in the research cruise led by Woods Hole Oceanographic Institution marine geochemist Ken Buesseler off the coast of Japan in June 2011.

Analyzing plankton and fish sampled on the cruise, they consistently found cesium-134 and cesium-137.
Not surprisingly, they found no iodine-131, the isotope which along with cesium had been released in highest quantity from the damaged Dai-ichi nuclear power plant. Iodine-131, with its half-life of a mere eight days, was undetectable after a couple of months, Fisher explained. Cesium, of course, is a different story. The ocean and its denizens continue to bear traces of cesium-137 that date from the atmospheric weapons testing during the Cold War era of the 1960s. Cesium-134, while much shorter-lived, will persist for a number of years. The chemical properties of radioactive cesium are similar to those of non-radioactive cesium and naturally occurring potassium and sodium, which are abundant in seawater. So all these end up in the same tissues, particularly muscle, of fish and other marine organisms. But potassium and sodium are much less abundant in fresh water, so cesium uptake is much higher in freshwater organisms than in sea life.  Fish also excrete cesium fairly efficiently, losing a few percent per day. So if fish are no longer exposed to new contamination sources, the levels in their tissue should decrease fairly quickly. Of particular concern for top-level consumers is the potential that these radioisotopes will be concentrated as they make their way up the food chain—what ecologists call biomagnification.

Fortunately, cesium shows only modest biomagnification in marine food chains—much less than mercury, a toxic metal, or many other harmful organic compounds such the insecticide DDT and polychlorinated biphenyls (PCBs), Fisher said.

On the 2011 cruise, he and his team measured cesium in everything they sampled. “These were primarily zooplankton and some fish,” he reported. As expected, concentrations were higher in organisms sampled closer to shore. Radioactive silver (110mAg) was also detected in all zooplankton samples. In all cases, however, the amounts of cesium and silver isotopes were much lower than those of naturally occurring potassium-40 in the same samples.

“The radioactivity of the fish we caught and analyzed would not pose problems for human consumption,” he said. Which is not, he noted, the same thing as saying that all marine organisms caught in the region are perfectly safe to eat.

Persistently higher-than-normal levels
What’s puzzling to Fisher, Buesseler, and many other scientists is the persistence of these low but significant levels of radioactivity in the ocean. Jota Kanda, an oceanographer at the Tokyo University of Marine Science and Technology, has extensively studied coastal waters off Fukushima and calculated the amount of cesium still present in coastal waters shallower than 200 meters (660 feet) and in sediments on the seafloor. By his reckoning, what remains is less than three percent of the total discharge, with the rest long since flushed out to the open ocean.

Yet levels of the cesium radioisotopes are still being measured at several tens to hundreds of becquerels per cubic meter in this area, Kanda noted, considerably higher than the levels prior to the Fukushima disaster. More importantly, levels measured in coastal sediments and in some species of fish are higher than those in the surrounding water.

As Kanda sees it, there are three sources responsible for this stubborn presence. One is river runoff—the fallout washed by rainfall into nearby rivers that drain to the sea. He also suggested that a small amount of contaminated water from basement compartments in the reaction unit housing is continuing to leak from the plant itself. But the biggest culprit—the only plausible explanation for the steady levels of radioactive cesium being measured in fish tissue—is continuous input through a food source. And that, he said, points to sediments.

Kanda has estimated that a total of 95 terabecquerels of cesium (1012 becquerels) is present in coastal sediments. The question, he maintained, is how it got there. It could have drifted down to the seafloor in the fecal pellets of plankton that consumed it at the surface—and in fact, plankton in shallow waters sometimes showed elevated levels of cesium. It could also be arriving with organic bits and pieces carried along by river water. It could have adhered to clay particles that came in contact with contaminated water; such radioactive cesium is tightly bound to clay particles and may not be easily transferred to marine life.

Sediment is complex stuff, he explained. Viewed up close, a single grain of what looks like sand is likely a mélange of mineral, organic matter, and pore water—the liquid trapped in the tiny gaps between particles. How contaminants are taken into these agglomerations is not well understood. Echoing Scott Fowler, Kanda noted that the composition and properties of sediments can vary dramatically. Solving the mystery of the ongoing radioactivity will require a thorough analysis of the seafloor off Fukushima’s coast, he stressed. “Local communities are concerned.

They want to know ‘When can we resume fishing?’ We scientists will have to answer this question.

”The key may be how long cesium stays put and the pathways for its uptake into the food chain. Given the 30-year half-life of cesium-137, the sediments could be a possible source of contamination in the food chain for decades to come.”

The Accidents at Fukushima
http://www.whoi.edu/website/fukushima-symposium/overview

Fukushima and the Ocean Colloquium, May 9, 2013
http://www.whoi.edu/main/morss/fukushima

Lessons from the Japan Earthquake
http://www.whoi.edu/oceanus/viewArticle.do?id=131749