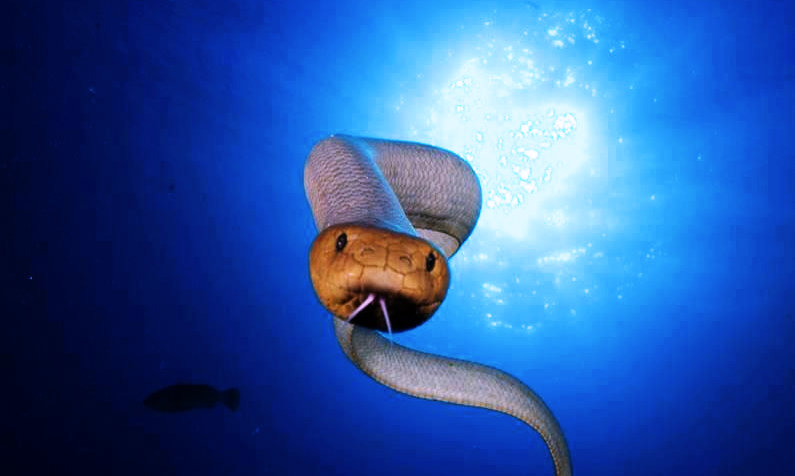 4. Results
4.1. 2016 TCMP Effectiveness Scores Using the Adapted Scorecard
Using available documentation on the TCMP and in person observations, all questions included in the adapted scorecard (Appendix 1) could be adequately addressed except for four of the Outcomes section questions due to lack of reliable, available information. Results showed that the TCMP scored a ranking equating to “fairly” effective in the Context, Inputs, and Outputs categories (61% – 62%) and a ranking of “limited” effectiveness in terms of the Process and Planning categories (33% – 36%). The scoring for the Park for indicators assessing Outcomes indicated its effectiveness for this category could be termed “deficient”, having received a score of only 22%. The overall assessment of TCMP effectiveness could be considered “limited”, based on a score 39% for the six categories included in the adapted scorecard (Table 1).

The urgent need for improvement in the performance of the TCMP, as identified using the modified scorecard is highlighted in Figure 4. While there is room for improvement in the Context, Inputs and Output categories, having all been assigned a ranking of “fair”, attention should be prioritized to address issues associated with Planning and Process which have been assigned a ranking of “deficient”. Given improvements in these categories, one can expect better scores for the expected Outcomes over time. 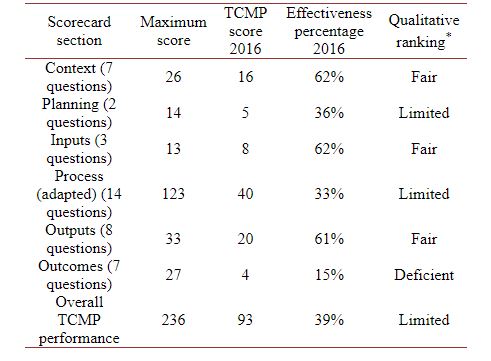 Figure 4. TCMP effectiveness by category in 2016 using the adapted scorecard.

4.2. Evaluating Effectiveness over the Period 2007 to 2016
This analysis examined the results obtained using the original scorecard for 2007 and the adapted scorecard for 2016 where additional questions were added to the Process category. To highlight the difference in the scoring for Process indicators using the different scorecards, the scoring for this category are shown using those questions asked in the original scorecard and the supplemental questions added to create the modified scorecard. When compared to the results of 2007, the assessment of effectiveness in 2016 relating to Context, Inputs, and Outputs showed considerable improvement (Figure 5). This was attributed to better control of human activities in the Park, the start of the process to include the TCMP into a larger coastal management plan, and the availability of more information to manage the area (Table 2). In addition, it seemed that the staff and budget had slightly improved in 2016 over 2007. However, stakeholder engagement and participation decreased in the ensuing decade. The assessment conducted in 2007 provided no information on measuring indicators addressing Outputs. In contrast, the 2016 Output scores were relatively high due to the improvement in the MPA legal status, management, enforcement, boundary demarcation, resource inventory, existence of moorings, existence of visitor facilities, fees that support the management of the MPA, etc. (Table 2).

Regarding the Planning category, even though there has been an agreement on the goals for the MPA and an increased level of implementation of the management plan since 2007, the scores assigned for both years were the same. For 2016, these higher scores were offset by the decrease in stakeholder participation and the inclusion of socioeconomic issues. However, as shown in Table 3, both assessments obtained similar scores for different reasons. 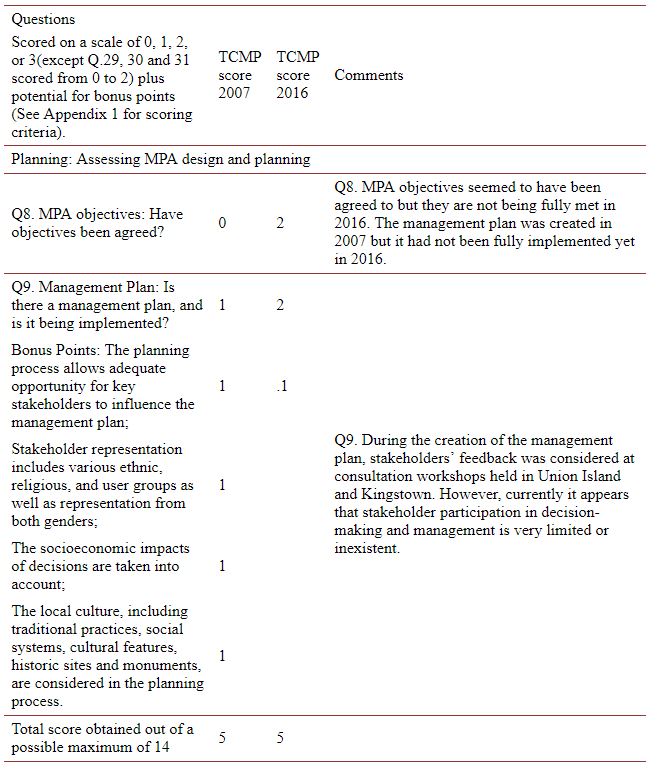 With regard to the assessment of Outcome indicators in 2007, only one sub- question was addressed, specifying that resource conflict had been reduced. The 2016 scores for Outcomes, while higher than that obtained in 2007, scored only a 15% effectiveness ranking. This was due to management objectives and threats had not been fully addressed, overall resource conditions not improving, and lack of current information to score the community welfare, environmental awareness and stakeholder satisfaction with the outcomes of compliance and management of this MPA (Table 4).

Finally, in the Process category, the score for 2016 was lower than in 2007 when using the original scorecard only (Figure 5). This was the result of the apparent lack of communication between managers and stakeholders, and a reduction in stakeholder participation. Using the supplemental questions as a measure of effectiveness in 2016 in the adapted scorecard, the Process section obtained a higher score due to the evaluation of information available for specific monitoring indicators in the modified framework (Table 5).

4.3. Selecting Indicators to Assess Achievement of TCMP’s Goals
Based on the four goals identified for the TCMP and the indicators highlighted in the adapted framework, 20 indicators in total (five for each of the four goals) were identified as important for future assessment of progress towards achieving the goals. Of these indicators, 17 were part of the set proposed by Pomeroy et al. (2005) [23] , while three new ones (illegal activities rate; number of visitors; fees collected) were added by the authors in order to gain additional information regarding Goal 2, which focused on economic benefits (Table 6). In addition to their fit with the goals of the TCMP, criteria for selecting the indicators were based on availability of information (pre and post 2015) and feasibility to be monitored. 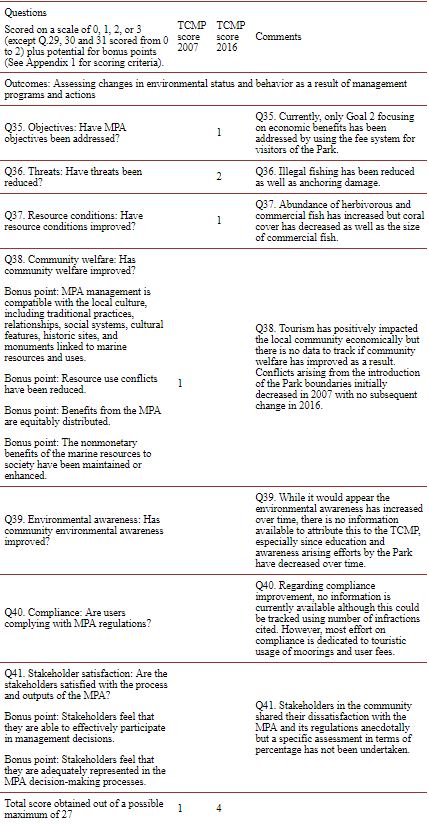 As noted from the assessment of available information, only six of the indicators have available information and of those, only one has current information, i.e. post 2015. However, it is worth noting that at least one indicator per goal has been tracked, allowing for limited progress on each of the goals to be assessed. The challenge for the TCMP is to obtain monitoring data on at least these six indicators on an ongoing basis and to increase the level of monitoring to more than the existing six indicators. As such, measuring progress towards Park goals would require a concerted monitoring effort on the part of Park staff and/or their partners. However, given the importance of tracking the achievement of Park goals to determine the effectiveness of the TCMP, a plan to put in place the mechanisms needed should be undertaken and implemented. 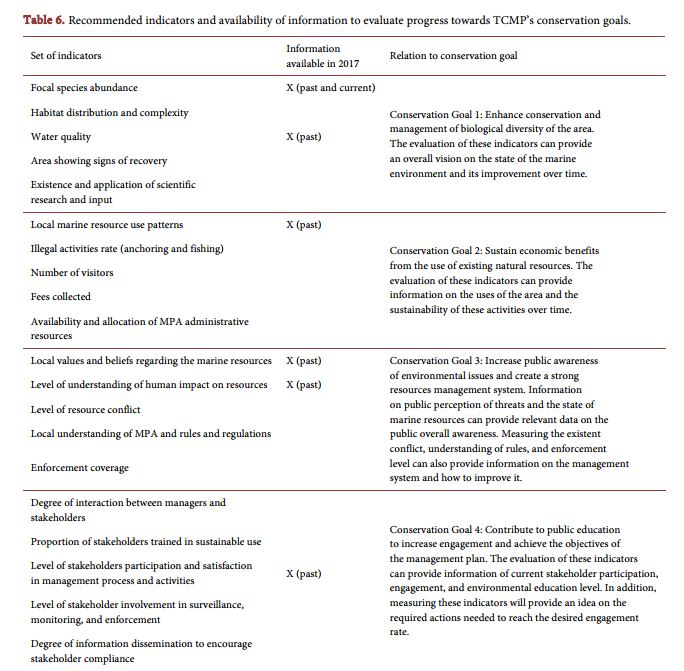 4.4. A Preliminary Assessment of TCMP Effect on Conch Abundance and Density
A total of 21 individuals were found during the surveys in 2016, 12 of them (57%) were juveniles, while 9 of them (43%) were adults. Conch density found in the study area was 36.4 individuals/ha in total, 20.8 juveniles/ha, and 15.6 adults/ha. Of the conch found, 16 individuals were encountered inside the TCMP (77%), while only 5 (24%) were encountered outside the TCMP. Interestingly, no adults were found outside the TCMP. Higher densities of conch were found in deeper areas (52.1 ind/ha in total), both for juveniles and adults. In shallow areas, the density was lower (20.8 ind/ha in total), and the proportion of adults and juveniles was equal (Table 7). 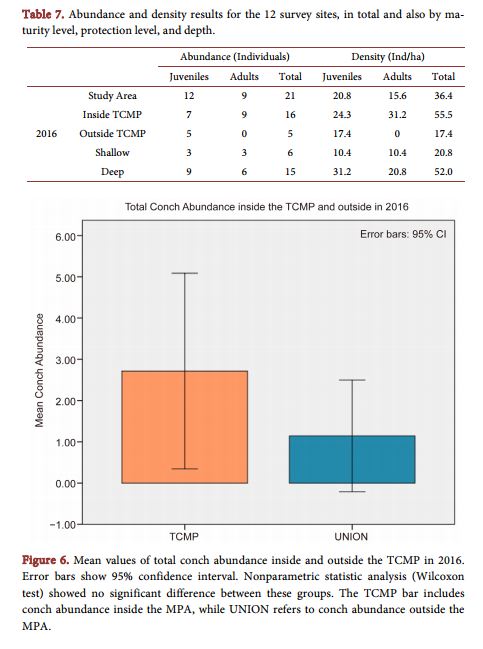 This work is licensed under the Creative Commons Attribution International License (CC BY 4.0). http://creativecommons.org/licenses/by/4.0/