The Mesozoic Era, When Dinosaurs Ruled

Pangaea, the super-continent formed at the end of the Paleozoic Era, existed for about 100 million years, until rifting commenced during the Late Triassic and Early Jurassic Periods and the super-continent began to break up. By the end of the Jurassic Period, rifting had succeeded in splitting North America from Europe and Africa. The Mid-Atlantic Ridge formed, and the North Atlantic Ocean started to grow. According to the record of sedimentary rocks, Earth overall had a warm climate during the Triassic and Early Jurassic. But during the Late Jurassic and Early Cretaceous, the climate cooled.

Pangaea’s interior remained a non-marine environment in which red sandstones and shales, now exposed in the spectacular cliffs of Zion National Park, were deposited.  By the Middle Jurassic Period, sea level began to rise, and a shallow sea submerged much of the Rocky Mountain region. 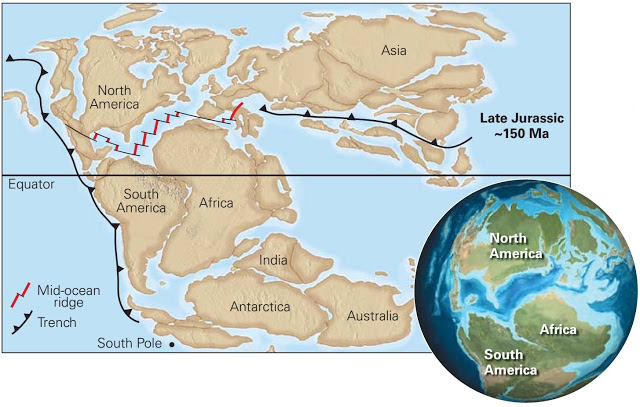 The Mesozoic Era where Dinosaurs were dominant spanned from 251-65 Ma. The Early and Middle Mesozoic Era (Triassic–Jurassic Periods, 251–145 Ma)

On the western margin of North America, convergent margin tectonics became the order of the day. Beginning with Late Permian and continuing through Mesozoic time, subduction generated volcanic island arcs and caused them, along with micro-continents and hot-spot volcanoes, to collide with North America. Thus, North America grew in land area by the accretion of crustal fragments on its western margin. Because these fragments consist of crust that formed elsewhere, not originally on or adjacent to the continent, geologists call them exotic terranes. From the end of the Jurassic through the Cretaceous Period, a major continental volcanic arc, the Sierran arc, grew on the western margin of North America itself; you’ll learn more about this arc later.

During the Jurassic, giant dinosaurs roamed the land. This painting shows several species.

Reptiles swam in the oceans, and new kinds of corals became the predominant reef builders. However, on land, gymnosperms and reptiles diversiﬁed, and the Earth saw its ﬁrst turtles and ﬂying reptiles. And at the end of the Triassic Period, the ﬁrst true dinosaurs evolved. Dinosaurs differed from other reptiles in that their legs were positioned under their bodies rather than off to the sides, and they were possibly warm blooded. By the end of the Jurassic Period, gigantic sauropod dinosaurs (weighing up to 100 tons), along with other familiar examples such as stegosaurus, thundered across the landscape, and the ﬁrst feathered birds, such as Archaepteryx, took to the skies (figure above). The earliest ancestors of mammals appeared at the end of the Triassic Period, in the form of small, rat-like creatures.

The Late Mesozoic Era  (Cretaceous Period, 145–65 Ma)
During the Cretaceous Period, the Earth’s climate continued to shift to warmer conditions, and sea level rose signiﬁcantly, reaching levels that had not been attained  for the previous 200 million years. Great seaways ﬂooded most of the continents. In fact, during the latter part of the Cretaceous Period, a shark could have swum from the Gulf of Mexico to the Arctic Ocean, or across much of western Europe. The breakup of Pangaea continued through the Cretaceous Period, with the opening of the South Atlantic Ocean and the separation of South America and Africa from Antarctica and Australia. 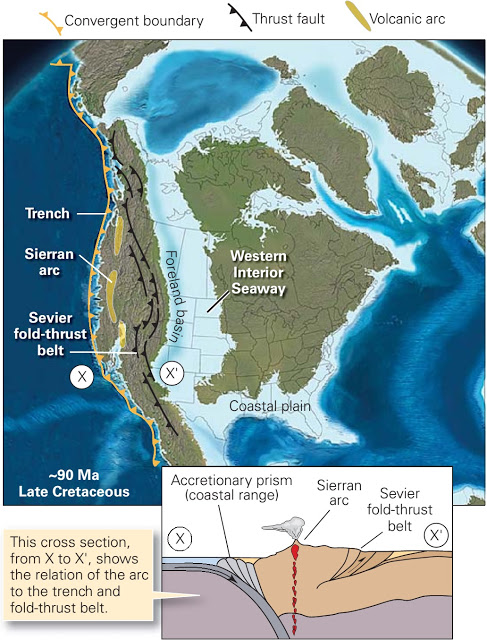 During the Late Cretaceous, a continental volcanic arc formed. A fold thrust belt formed to the east, as did a transcontinental seaway. 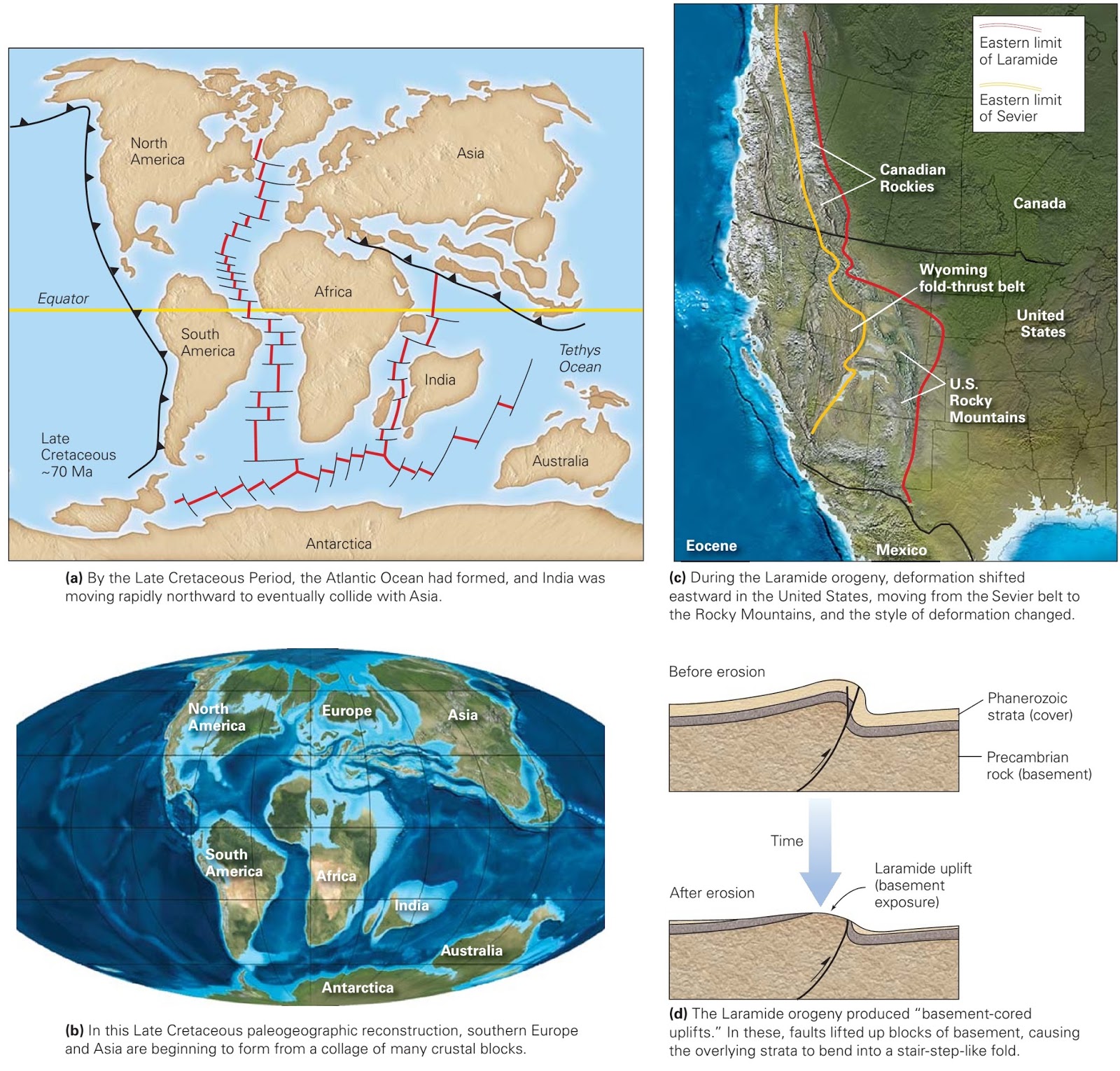 India broke away from Gondwana and headed rapidly northward toward Asia (figure  a, b). Along the continental margins of the newly formed Mesozoic oceans, passive-margin basins developed that ﬁlled with great thicknesses of sediments. In western North America, the Sierran arc, a large continental volcanic arc that initiated at the end of the Jurassic Period, continued to be active. This arc resembled the present day Andean arc of western South America. Though the volcanoes of the Sierran arc have long since eroded away, we can see their roots in the form of the plutons that now constitute the granitic batholith of the Sierra Nevada Mountains. Compressional stresses along the western North American convergent boundary activated large thrust faults east of the arc, an event geologists refer to as the Sevier orogeny. This orogeny produced a fold-thrust belt whose remnants you can see today in the Canadian Rockies and in western Wyoming (figure above c). At the end of the Cretaceous Period, continued compression along the convergent boundary of western North America caused slip on large faults in the region of Wyoming, Colorado, eastern Utah, and northern Arizona. In contrast to the faults of fold-thrust belts, these faults penetrated deep into the Precambrian rocks of the continent, and thus movement on them generated basement uplifts (figure above d). Overlying layers of Paleozoic strata warped into large monoclines, folds whose shape resembles the drape of a carpet over a step.

This event, which geologists call the Laramide orogeny, formed the structure of the present Rocky Mountains in the United States. Geologists have determined that sea-ﬂoor spreading rates may have been as much as three times faster during the Cretaceous than they are today. As a result, more of the oceanic crust was younger and warmer than it is today, and since young sea ﬂoor lies at a shallower depth than does older sea ﬂoor (due to isostasy); Cretaceous mid-ocean ridges occupied more volume than they do today.
The extra volume of the ridges displaced sea water, causing sea level to rise. Also during the Cretaceous, huge submarine plateaus formed from basalts erupted at hot-spot volcanoes. The existence of these plateaus implies that particularly active mantle plumes, or super plumes, reached the base of the lithosphere. Growth of submarine plateaus displaced sea water and thus also contributed to sea-level rise.

Volcanism associated with extra-rapid sea-ﬂoor spreading, as well as with submarine plateau growth, likely released CO2 into the atmosphere. Geologists hypothesize that this increased atmospheric CO2 concentration led to a global rise in atmospheric temperature. Rising temperatures would cause sea water to expand and polar ice sheets to melt, both phenomena that would make sea level go up even more. Considering all the phenomena that caused sea level to rise during the Cretaceous, it’s no surprise that the continents ﬂooded and that large epicontinental seas formed during this era.

Life evolution
In the seas of the late Mesozoic world, modern ﬁsh appeared and became dominant. In contrast with earlier ﬁsh, the new ﬁsh had short jaws, rounded scales, symmetrical tails, and specialized ﬁns. Huge swimming reptiles and gigantic turtles (with shells up to 4 m across) preyed on the ﬁsh. On land, cycads largely vanished, and angiosperms (ﬂowering plants), including hardwood trees, began to compete successfully with conifers for dominance of the forest. Dinosaurs reached their peak of success at this time, inhabiting almost all environments on Earth. Social herds of grazing dinosaurs roamed the plains, preyed on by the fearsome Tyrannosaurus rex (a Cretaceous, not a Jurassic, dinosaur, despite what Hollywood says). Pterosaurs, with wingspans of up to 11 m, soared overhead, and birds began to diversify. Mammals also diversiﬁed and developed larger brains and more specialized teeth, but for the most part, they remained small and rat-like. 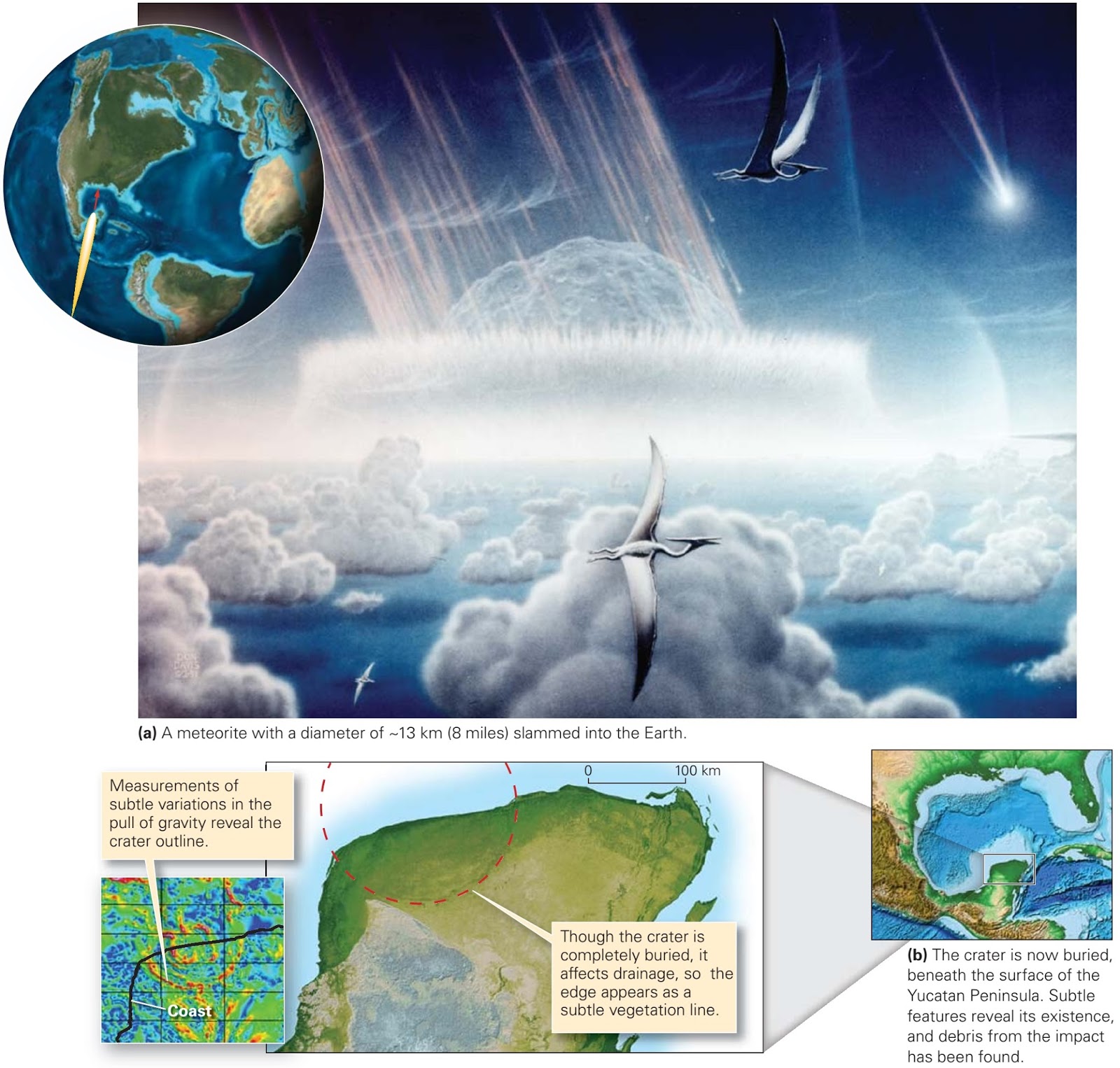 The Cretaceous tertiary impact. The aftermath probably caused extinction of the dinosaurs and other species.

The “K-T boundary event”
Geologists ﬁrst recognized the K-T boundary (K stands for Cretaceous and T for Tertiary) from 18th-century studies that identiﬁed an abrupt global change in fossil assemblages. Until the 1980s, most geologists assumed the faunal turnover took millions of years.

But modern dating techniques indicate that this change happened almost instantaneously and that it represents a sudden mass extinction of most species on Earth. The dinosaurs, which had ruled the planet for over 150 million years, simply vanished, along with 90% of plankton species in the ocean and up to 75% of plant  species. What kind of catastrophe could cause such a sudden and extensive mass extinction?

The cause of the K-T mass extinction remained a mystery until the late 1970s, when Walter Alvarez, an American geologist, and his colleagues examined a shale layer deposited exactly at the K-T boundary. They found that this shale contained relatively high concentrations of iridium, an element that comes primarily from meteorites. Further study showed that the clays of this age contained other unusual materials, such as tiny glass spheres formed when a spray of molten rock freezes, grains of coesite (a mineral that forms when intense shock waves pass through quartz), and even carbon from burned vegetation. All these features pointed to the occurrence of a huge meteorite impact at the time of the K-T boundary. Subsequently, geologists found a 100-km-diameter and 16-km-deep meteorite crater buried beneath younger strata of the Yucatan  Peninsula in Mexico (figure above a, b). Isotopic dating indicates that formation of the crater occurred at 65 o 0.4 Ma, the time of the K-T boundary event. Because of its age and size, this crater, known as the Chicxulub crater, may be the grave of the deadly object whose impact with Earth eliminated so much life. The impact caused so much destruction because it not only formed a crater, blasting huge quantities of debris into the sky, but probably also generated 2-km-high tsunamis that inundated the shores of continents and generated a blast of hot air that set forests on ﬁre. The blast and the blaze together could have ejected so much debris into the atmosphere that for months there would have been perpetual night and winter like cold. In addition, chemicals ejected into the air could have combined with water to produce acid rain. These conditions would cause photosynthesis to all but cease, and thus would break the food chain and trigger extinctions.