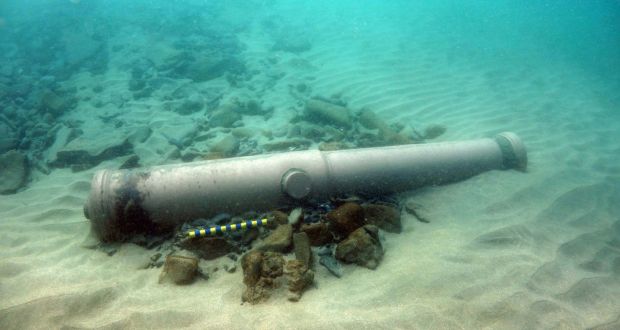 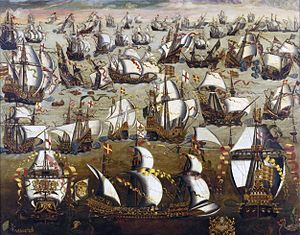 .
The Spanish Armada (Spanish: Grande y Felicísima Armada, literally “Great and Most Fortunate Navy”) was a Spanish fleet of 130 ships that sailed from La Coruna  in August 1588, under the command of the Duke of Medina Sidonia to transfer an army to invade England.

The strategic aim was to overthrow Queen Elizabeth I and the establishment of Protestantism in England, with the expectation that this would put a stop to English interference in the Spanish Netherlands and to the harm caused to Spanish interests in the Caribbean Sea by English and Dutch privateering.

As you remember, it was the time of Sir Francis Drake. England was saved by the wrong Armada chose not to attack the English fleet at Plymouth. The heavy ships of Armada finally dropped anchor off Calais. While awaiting communications from the Duke of Parma’s army, the Armada was scattered by a supposed English fireship attack, as was happened before in Anverse. In the ensuing Battle of Gravelines the Armada was damaged and forced to abandon its rendezvous with Parma’s army, who were blockaded in harbour by Dutch. The Armada managed to regroup and, driven by southwest winds, withdrew north, with the English fleet harrying it up the east coast of England. Although the commander ordered a return to Spain, the Armada run by professionally poor captains  was damaged by severe storms in the North Atlantic and a large number of the vessels were wrecked on the coasts of Scotland and Ireland. Eventually, of the initial 130 ships, over a third failed to return. One of the cannons uncovered at Streedagh, Co Sligo, from the wreck of the Spanish Armada ship La Juliana, which sank in 1588. Photograph: Department of Arts, Heritage and the Gaeltacht/PA

Archeological researches have been conducted and, in 1985, an interesting site was located.  In 2015, two 16th-century cannons, in extraordinarily good condition, have been recovered by underwater archaeologists. They have been found in a wreck site off Streedagh, Co Sligo, and are from one merchant vessel, La Juliana, launched in 1570 near Barcelona, Spain. King Philip II commandeered her on 15 December 1586 at Sicily, and had her armed with 32 guns for the Spanish Armada.  In 1985, local divers found the wreckage of three vessels of the Armada that had been driven ashore in autumn 1588 at Streedagh Strand, on the west coast of Ireland. At that time, two were identified as La Lavia and the La Santa Maria de Vison; La Juliana was probably the third, but that identity was less certain. The three vessels had been part of the Levant squadron, which had been under the command of Don Martin de Bertendona in La Regazona. La Lavia was the vice flagship.

The decision to retrieve the cannons and other artefacts was taken by Ms Humphreys’s department after storms exposed some timbers from the Armada wrecks at Streedagh earlier in 2015. 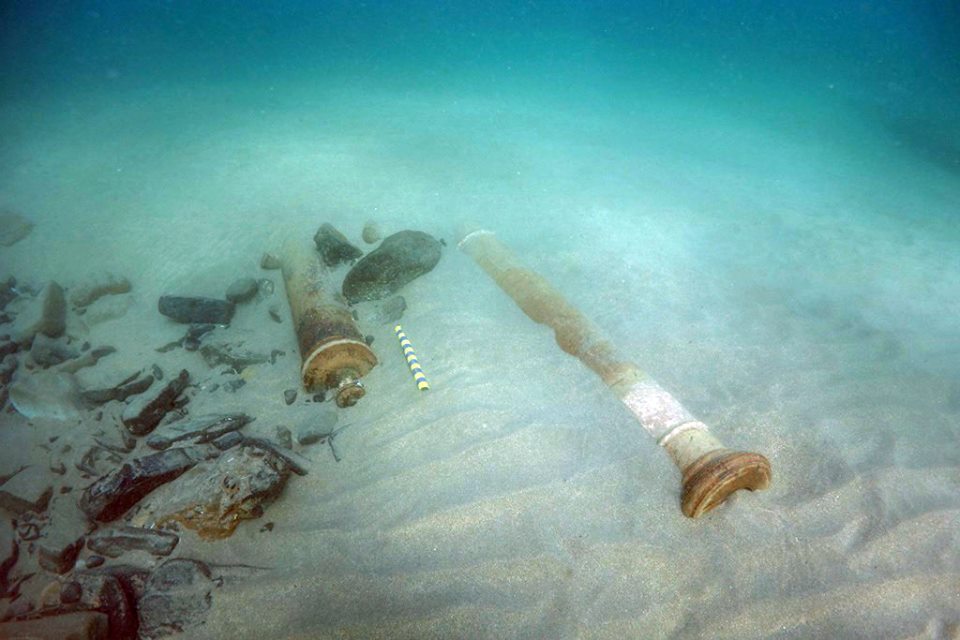 The recovery by the Underwater Archaeology Unit attached to the Department of Arts, Heritage and the Gaeltacht was assisted by skipper Anthony Irwin on his boat Dúlra na Mara. “The divers prepared the seabed area and then we used airbags and chain blocks to winch the cannons on to the deck …” said Mr Irwin. 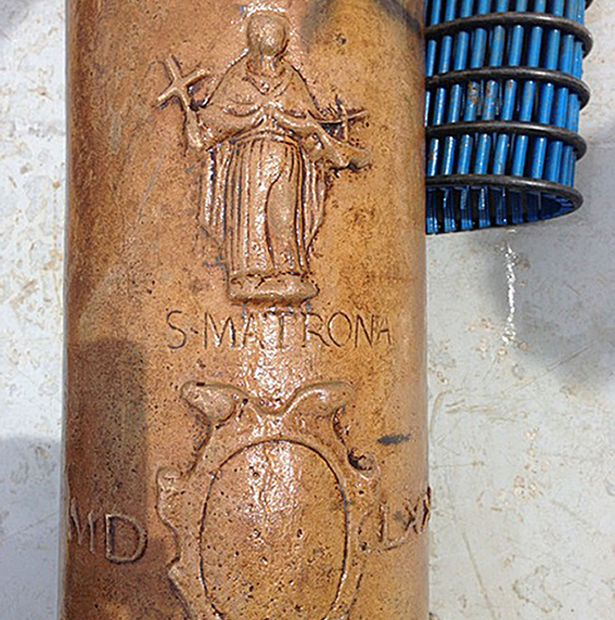 Quite interesting was the finding on one of the cannons that bears a dedication to and depiction of St Matrona, venerated by the people of Catalonia and Barcelona. The La Juliana weighed 860 tons, carried 32 guns, 325 soldiers and had a crew of 70. It has been estimated that some between 17 and 24 ships of the Grand Armada were lost on the Irish coast, accounting for about one-third of the fleet’s total loss of 63, with the loss of about 5,000 men. Two other vessels, La Lavia and Santa Maria de Vision, from the Armada sank nearby in violent storms in September 1588 and more than 1,000 soldiers and mariners drowned when the went down. Heather Humphreys, Irish minister for arts, heritage and the gaeltacht, has visited the wreck site and said: “We have uncovered a wealth of fascinating and highly significant material, which is more than 425 years old … This material is obviously very historically and archaeologically significant.”