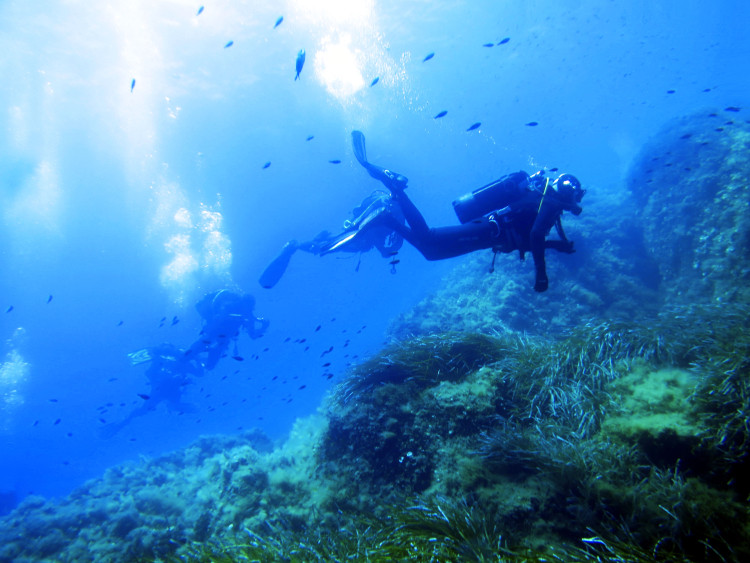 Existing methods to predict the effects of climate change on the biomass and production of marine communities are predicated on modelling the interactions and dynamics of individual species, a very challenging approach when interactions and distributions are changing and little is known about the ecological mechanisms driving the responses of many species. An informative parallel approach is to develop size-based methods. These capture the properties of food webs that describe energy flux and production at a particular size, independent of species’ ecology. We couple a physical–biogeochemical model with a dynamic, size-based food web model to predict the future effects of climate change on fish biomass and production in 11 large regional shelf seas, with and without fishing effects. Changes in potential fish production are shown to most strongly mirror changes in phytoplankton production. We project declines of 30–60% in potential fish production across some important areas of tropical shelf and upwelling seas, most notably in the eastern Indo-Pacific, the northern Humboldt and the North Canary Current. Conversely, in some areas of the high latitude shelf seas, the production of pelagic predators was projected to increase by 28–89%. 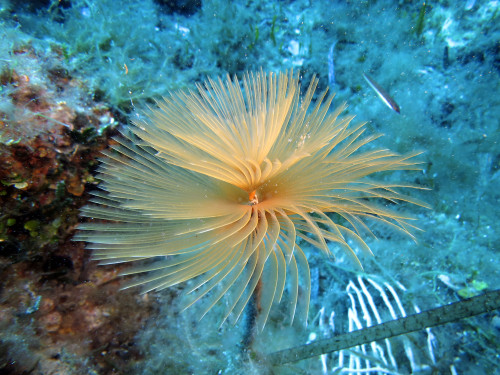 Introduction
Globally, some 80 Mt of marine fish are landed each year and these are consumed directly or used to produce fishmeal and oils for aquaculture and agriculture [1]. Many people are reliant on fish as their primary protein source in poorer countries, increasing their vulnerability to changes in fisheries production [2]. Burgeoning coastal human populations are also expected to increase demands for fish in future, and the potential production of fisheries will be influenced by climate change [3–5]. This poses challenges for the management of marine ecosystems and fisheries, especially when fish populations are already overexploited and/or climate reduces production [1,6].
Climate change influences fisheries production through its effects on primary production, food web interactions and the life history and distribution of target species. Changes in primary production follow from changes in the physical and chemical environment [7], while changes in the food web are also influenced by the availability of primary production [8]. Empirical evidence for climate change effects on marine ecosystems and their component species is growing [9–11]. Also, over the past three decades, the waters of the northeast Atlantic have warmed faster than the global average, and the distributions [12,13] and relative abundance of fishes have changed on local and regional scales [14]. Because the many impacts of climate change on marine ecosystems may be additive, synergistic or antagonistic, it is challenging to understand and predict responses at all spatial scales and levels of ecological complexity [15–17]. Climate effects on total fisheries production are particularly challenging to predict at ecosystem scales. Species identities, habitat affinities, physiological preferences, life histories and interspecific interactions vary among systems and are rarely known in sufficient detail to make predictions. As a result of this, we have tended to see the emergence of predictions for a few species at ecosystem scales, especially where the physical environment, the species’ ecology and interactions with the environment were previously well studied [18,19], and predictions based on simpler principles, such as climate envelope approaches, that can be applied at global scales [20,21].

Our limited understanding of the ecology of all species that contribute to fisheries production impedes our capacity to use species-based models to predict changes in fisheries production with climate change. As well as further developing species-focused approaches [22], an alternative and potentially informative parallel approach is to develop methods that do not require knowledge of individual species’ ecology. One promising method is based on size-based analyses that can be used to assess the consequences of changes in the environment and primary production changes on abundance and production at higher trophic levels [23]. The strengths of size-based analyses are that marine food webs are structured by size as much as species identity, because most primary producers are small, and that the body sizes of consumers are linked to their position in the food web. Further, body size largely determines metabolic rate and hence the rates of individual consumption and production [24,25]. 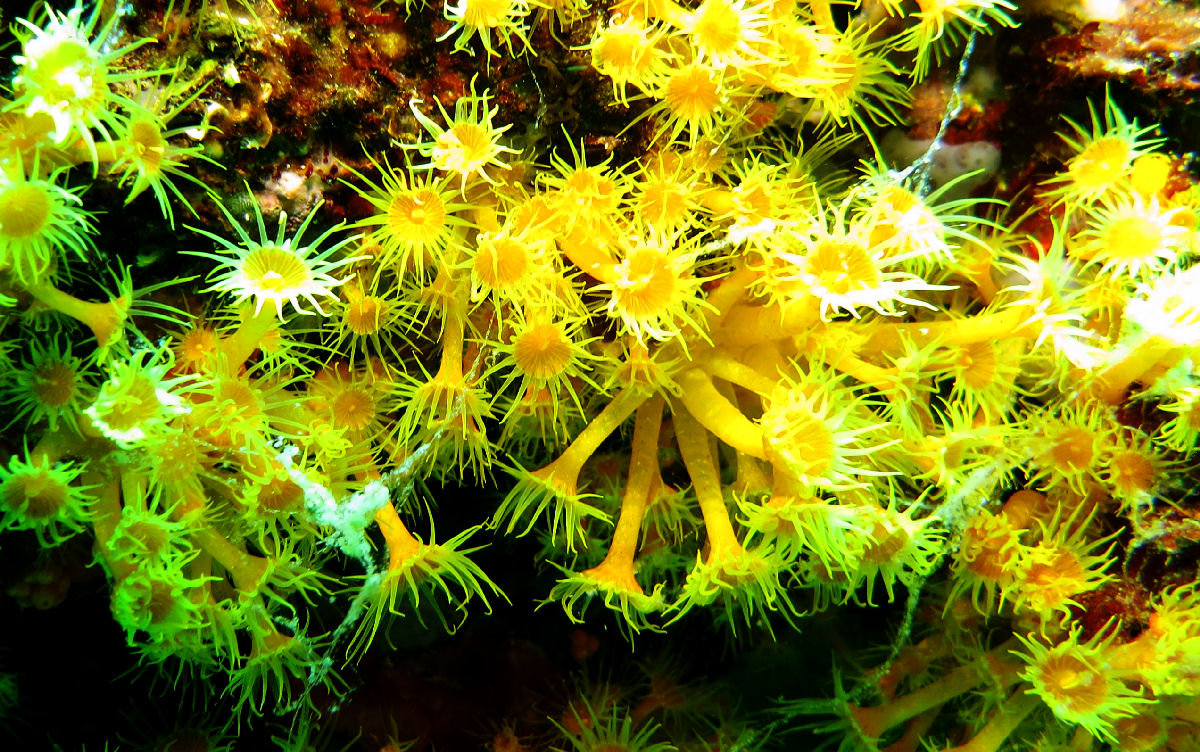 Static size-based models that are based on metabolic theory and empirical relationships between body size and trophic level have been applied to investigate unexploited production and biomass of larger marine animals in the global oceans under current environmental conditions [26]. Dynamic size-spectrum models can extend this approach by considering the time-dependent and continuous growth and mortality processes that result from size-structured feeding, representative of pelagic ecosystems [27,28]. They can be used to predict the consequences of fishing mortality and changes in primary production as well as temperature effects on dynamical changes in the community size spectrum [29,30], and have been modified to incorporate the strong benthic–pelagic coupling that characterizes relatively shallow aquatic ecosystems, including shelf seas [31–33]. Despite simple underlying assumptions and relative ease of parametrization, size-based models have proved remarkably capable of predicting broad-scale patterns of size-structure and production observed in nature [26,31]. 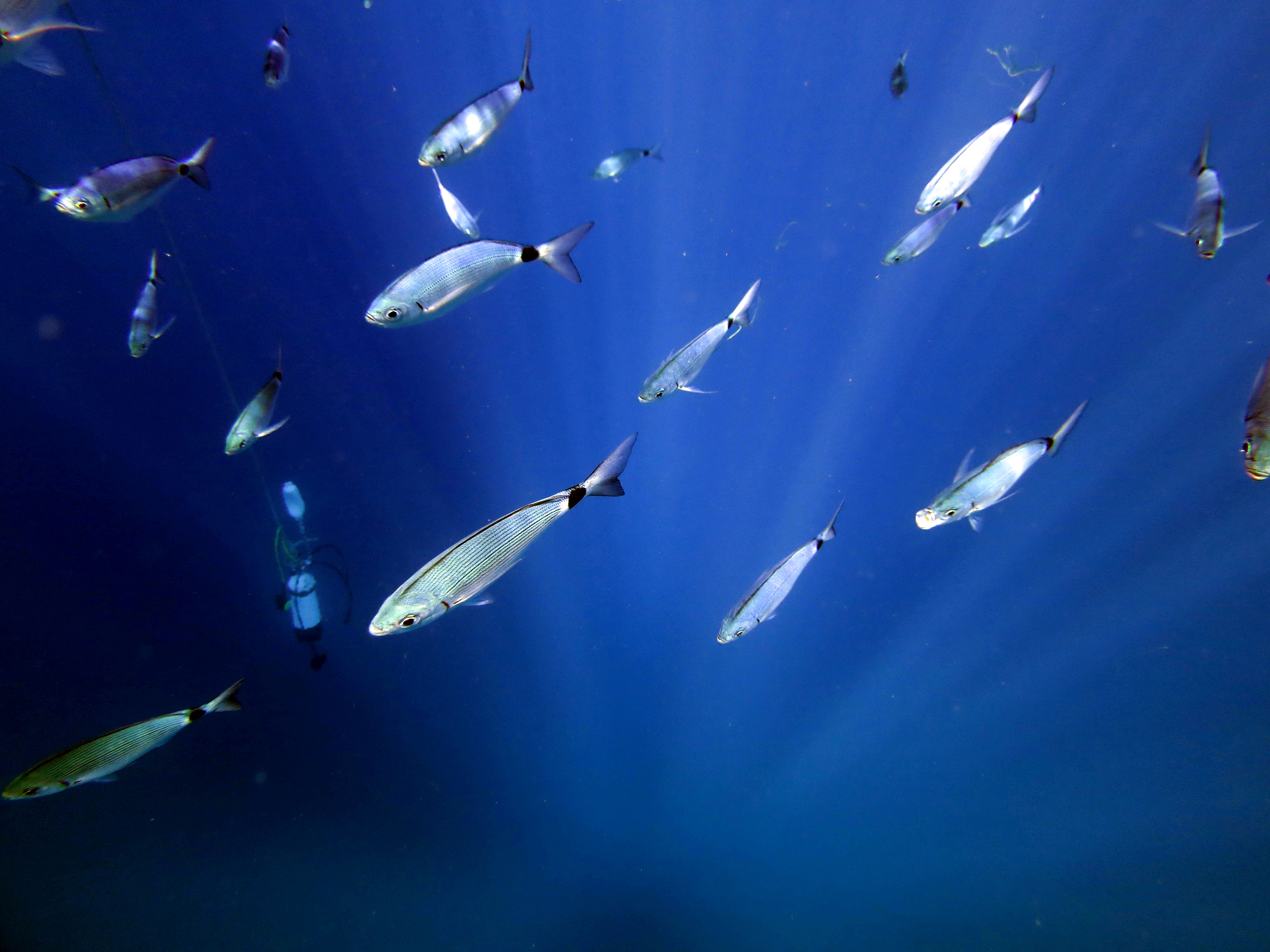 Most of the global fish catch is taken from countries’ exclusive economic zones (EEZ) in shelf-sea ecosystems, where most of the global marine primary production also occurs. Thus, any effects of climate on these seas are expected to have disproportionate effects on global primary and fish production. However, the current generation of coupled global climate models are unable to resolve many of the processes that influence the primary production in shelf sea ecosystems (e.g. tides, wind, run-off, recycling, seasonal stratification). To begin to address some of these issues, high-resolution-coupled physical–biogeochemical models of the shelf seas are being used, where downscaled data from the global climate simulations are used to force these regional models to project future changes in shelf-sea ecosystems [34].

One such high-resolution-coupled physical–biogeochemical model has been extensively evaluated for parts of the Northwest European Shelf and has recently been extended for application to the global coastal ocean [34–38]. It is composed of two components: (i) the Proudman Oceanographic Laboratory Coastal-Ocean Modelling System—a three-dimensional physical hydrodynamic model, and (ii) the European Seas Regional Ecosystem Model, which describes the biogeochemical processes affecting the flow of carbon, nitrogen, phosphorus and silicon in planktonic pelagic and benthic ecosystems. The major controls on phytoplankton primary production in the model are the availability of light and nutrients and grazing pressure. On seasonal time-scales, the interplay between the light climate, turbulence and density stratification influences phytoplankton growth. On annual to multi-decadal time-scales, oceanic, terrestrial and atmospheric coupling control the nutrient supply to the shelf seas and hence the phytoplankton growth. 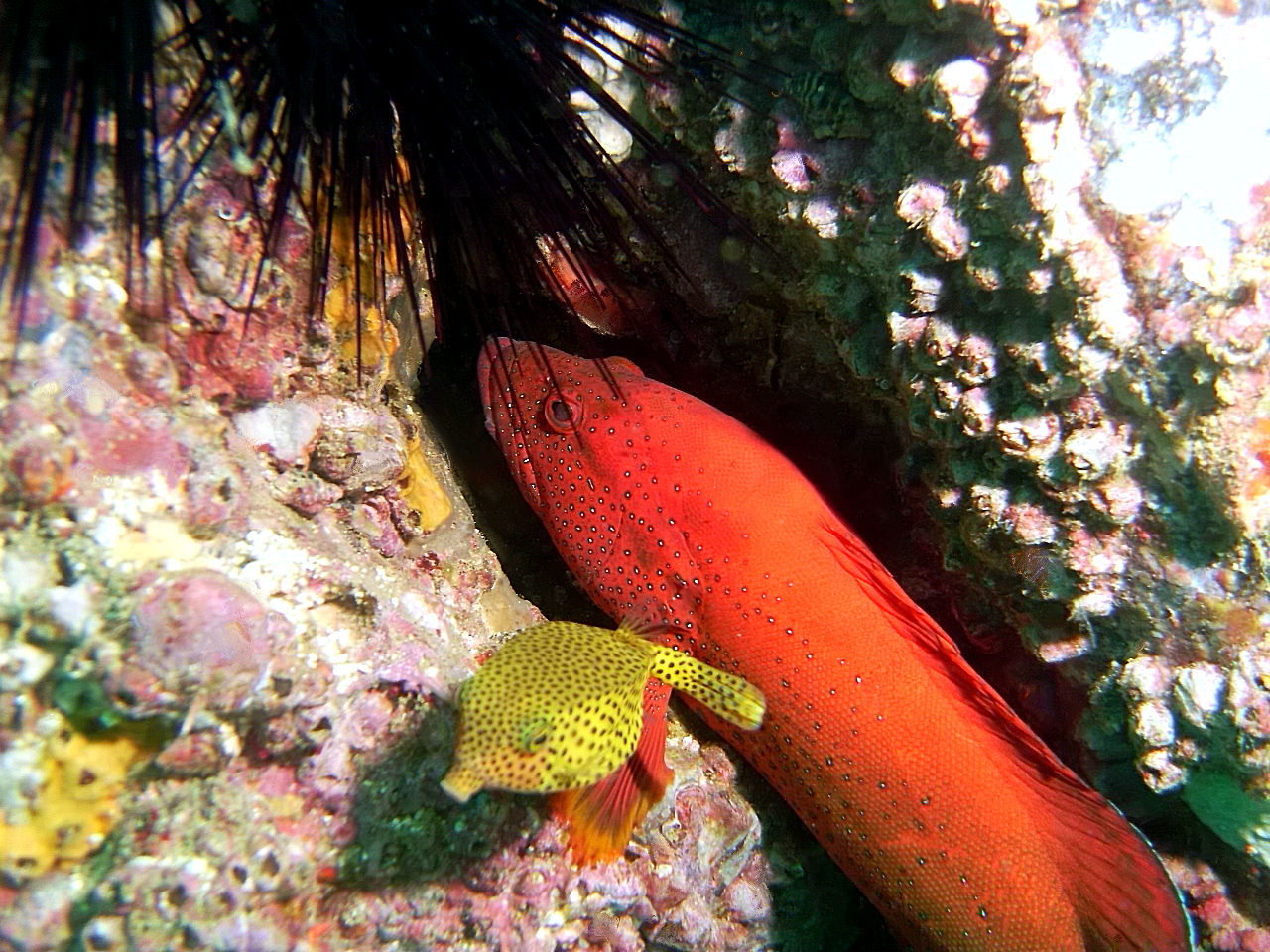 Here, we combine physical–biogeochemical and size-based ecosystem models to project future effects of climate change on fish biomass and production in 11 large regional domains. These include many of the most productive areas of the shelf seas and encompass 28 large marine ecosystems and 107 EEZ and adjacent areas. This area currently yields 60 per cent of average annual global catch and 77 per cent of total catch from inside EEZ. We use global climate model data and the ‘business as usual’ scenario from the Intergovernmental Panel on Climate Change (IPCC) Special Report on Emissions Scenarios (SRESA1B) [39] to force the whole biophysical modelling system, from which we obtain size-based estimates of changes in production and biomass by 2050. Projected ecosystem states in the absence of fishing are compared with those using a static size-based model of energy flux from primary producers to consumers. To validate fisheries past catch projections, recorded catches are compared with modelled catches for 78 of the countries EEZ. Finally, we explore the combined consequences of different fishing and climate change scenarios, to determine their relative effects within and among ecosystems.

for all references please follow the link to the original study