Laminaria rodriguezii, a Mediterranean deep-water kelp is in danger in the Adriatic Sea – part I

Abstract
Deep-water kelps are little-known large brown algae occurring close to the lower limit of photosynthetic life in the sea. This study compares historical and recent records of the deep-water Mediterranean kelp Laminaria rodriguezii in the Adriatic Sea. Historical records include data from herbarium collections and trawling fishery expeditions in the mid-twentieth century, while recent data comprise records of the last 17 years from MEDITS expeditions, ROV surveys of historical kelp locations, benthic surveys and records by fishermen. Altogether, these findings demonstrate that the Adriatic population of L. rodriguezii has suffered a decline of more than 85 % of its historical range and is now present only around the small offshore island of Palagruža. Bottom trawling activities are presumably responsible for the disappearance elsewhere. We propose to classify L. rodriguezii as “Endangered” in the Adriatic Sea under IUCN criteria B1ab(i,iii,iv), ver 3.1. Oceanographic characteristics of the habitat suggest that besides high water transparency, presence of North Adriatic Dense Water with both strong currents and stable low temperatures of around 14 °C are essential oceanographic factors for the development of L. rodriguezii in the Central Adriatic. The origin of cold water thus differs from that at upwelling sites permitting populations of tropical deep-water kelps. The phylogenetic position of L. rodriguezii is so far unknown. DNA sequences from nuclear and cytoplasmic markers of two thalli from Croatia and the western Mediterranean confirmed that L. rodrigueziiis a member of the Laminariaceae and most closely related to L. ochroleuca, L. pallida and the Brazilian deep-water kelp L. abyssalis.

Introduction
Surface waters of the Mediterranean Sea show strong seasonal temperature fluctuations. While winter and spring temperatures in the range of 12–17 °C are similar to neighbouring areas of the North Atlantic, summer temperatures of 20–28 °C are closer to the temperatures of tropical seas (e.g. Coll et al. 2010). Consequently, biota living in these surface waters are subject to a strong, temperature-driven selective pressure, excluding organisms from both cold-temperate and tropical regions. 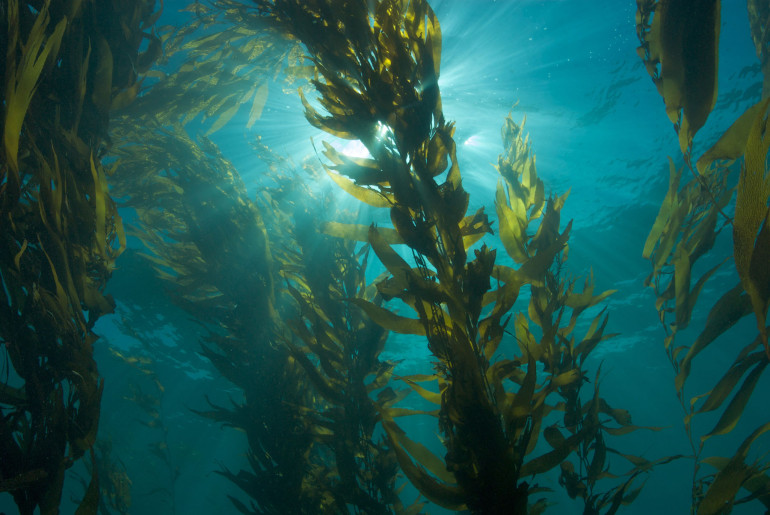 Laminaria rodriguezii is an endemic deep-water Mediterranean macroalga consisting of a branched holdfast, a stipe and an undivided blade of up to 150 × 30 cm in size (Beck 1896; Hamel 1931–1939). It is able to produce adventive blades vegetatively on stolons (Huvé 1955), which is a rare feature in the Laminariales and shared in the genus Laminaria only with L. sinclairii (Harvey) Farlow, Anderson & Eaton from the northeast Pacific (Demes and Graham 2011). Originally described by Bornet (1888), it is scattered in the Western Mediterranean and Adriatic Sea. The main populations occur around the Balearic Islands (Joher et al. 2012) and on seamounts in the Tyrrhenian Sea (Giaccone 1967; Bo et al. 2011). The species occurs in areas of very specific biotic and abiotic parameters, which are still only partly understood. It was mainly reported from depths >70 m, seldom found between 50 and 70 m, and exceptionally less deep on seamounts or in upwelling systems (30 m at Galite Island area in Tunisia; Ballesteros 2006). The maximum depth, 260 m, was recorded in the Adriatic Sea (Ercegović 1960). L. rodrigueziioccurs on loose-lying deep-water coralligenous beds (Ballesteros 2006) and may cover sea mounts, slopes and rocky ledges of offshore islands with prevailing highly transparent waters (Feldmann 1934; Giaccone 1969; Fredj 1972; Barcelo 1985; Bo et al. 2011). The upper limit possibly depends on temperature, while the lower limit is presumably determined by light availability (Joher et al. 2012). Since L. rodriguezii also lives in bottom trawling areas, there is concern on its conservation status (UNEP/IUCN/GISPosidonie 1990). In the Adriatic Sea, L. rodriguezii is only reported from the Central Adriatic (mainly in Croatian, occasionally in international waters). First detailed knowledge of its distribution in the region was obtained during the Hvar fisheries biology expedition in 1948–1949 (Ercegović 1960), which was conducted to gather data on commercial trawl resources after several years of suspension of fishing during the Second World War. This dataset is a baseline (zero state) dataset of trawling bottom species till 400 m depth (Vrgoč et al. 2004). The expedition also collected data on bycatch including benthic seaweeds. L. rodriguezii was found in the areas of Jabuka Pit (henceforth referred to as “Jabuka”), Biševo Island (“Biševo”) and Palagruža Island (“Palagruža”). Between 1956 and 1961, further fisheries expeditions also recorded data on deep-water algae (Gamulin–Brida 1965). During fisheries expeditions in the following three decades, data on L. rodriguezii were not collected.

Since 1996, annual fishery surveys (Mediterranean International Bottom Trawl Suveys, MEDITS) using trawl nets have been conducted, covering transects similar to the Hvar expedition (Bertrand et al. 2002). This allowed a comparison of historical fisheries data with new records. Within the framework of the project “Brown algal biodiversity and ecology in the Eastern Mediterranean Sea”, we have recently conducted deep-water transects in the areas of the Adriatic Sea where L. rodriguezii was recorded in the 1950s and 1960s, using a ship-deployed remotely-operated vehicle (ROV). The results of these transects, together with the biological surveys performed from the mid-1990s, combined with information provided by professional fishermen, give an overview of the recent populations of L. rodriguezii in the Adriatic Sea and allow to evaluate its distribution and conservation status. Little is known about the biology of L. rodriguezii, and in particular, there is no physiological knowledge about this species, which is without doubt because of the difficulty to collect live material. Also, the phylogenetic position of L. rodriguezii has not been clarified so far, with no sequence data having been reported. Using two thalli from the Adriatic and the western Mediterranean, as well as samples of putative relatives, we have generated sequences of nuclear and cytoplasmic markers, which suggest a close relationship with other Atlantic members of Laminaria.

Methods
Historical and spatial distribution of Laminaria rodriguezii
Data on the historical and current distribution of L. rodriguezii in the Adriatic were obtained from published and unpublished records. Unpublished data included specimens of L. rodriguezii housed in the main European and all Croatian herbaria, data collected during biological field surveys coordinated by the Institute of Oceanography and Fisheries in Split (IOF), and data obtained from fishermen since 2011. ROV surveys were conducted by IOF in May 2010 on eight transects in the areas with historical records of L. rodriguezii (Fig. 1b, c). ROVs were equipped with robot arms, enabling in situ collections of specimens.

To evaluate the extinction risk of L. rodriguezii in the Adriatic Sea as one of the subregions of the Mediterranean Sea, we used the IUCN Red List criteria and guidelines for regional level (IUCN 2012).

Oceanography
Oceanographic data (bottom water temperature, salinity, nutrients and surface transparency) of the area in which L. rodriguezii has been found during the last 17 years (Palagruža) were obtained from the permanent oceanographic station (Supporting Information). Current measurements were conducted for 9 months at an ADCP station located 2.6 km to the northwest of Palagruža (Fig. 1c) (Supporting Information).

Molecular phylogeny
DNA extraction was carried out on a specimen of L. rodriguezii collected near Palagruža (Adriatic Sea) and a herbarium specimen from Hecate Reef, Skerki Bank (international waters between Sicily and Tunisia), as well as on samples of L. ochroleuca Bachelot de la Pylaie, L. pallida Greville and L. abyssalis (Table S1; Supporting Information). L. ochroleuca is distributed in the NE Atlantic and in the western Mediterranean, including in deep water (Templado et al. 2006), L. pallida occurs in the upper subtidal in SW Africa and some temperate islands of the southern hemisphere (Stegenga et al. 1997), and L. abyssalis in deep water off Brazil (Marins et al. 2012). Molecular work on the herbarium specimen from Hecate Reef was realized in a different laboratory and years before studying the other samples. Polymerase chain reactions (PCR) were performed using specific primers for nuclear ribosomal DNA (SSU, ITS), the plastid-encoded rbcL and Rubisco spacer, and the mitochondrion-encoded genes cox1, cox3, and nad6. Primers and PCR conditions used are provided in the appendix. The new sequences were compared with published sequences using BLAST (Altschul et al. 1997); ITS, Rubisco spacer and 5′-COI sequences were manually aligned in Se-Al™ v2.0a11 (Sequencing Alignment Editor Version 2.0 alpha 11; http://tree.bio.ed.ac.uk/software/seal/) with published sequences. Neighbour-joining distance analyses using Kimura-2-parameter distances, maximum parsimony and maximum likelihood analyses were performed in PAUP (Swofford 2002).

Results
Historical and recent records of Laminaria rodriguezii in the Adriatic Sea
Historical data were compiled from herbarium samples, from the Hvar expedition (Ercegović 1960) and from fishery and biocenology expeditions in the 1950s and early 1960s (Grubišić and Gospodnetić 1955; Gamulin–Brida 1965). They provided information about the historical distribution of L. rodriguezii (Figs. 1a, S1A, Tables 1, S2).

Table 1
Records of Laminaria rodriguezii in the Adriatic Sea until 1961, based on bottom trawling records of the Hvar Expedition (Ercegović 1960) and fishery—biocenology expeditions in the Areas of Jabuka (J), Biševo (B) and Palagruža (P) in 1953 (Grubišić and Gospodnetić 1955) and 1957–1961 (Gamulin–Brida 1965)

The expedition of 1957–1961 covered six identical stations where L. rodriguezii was recorded during Hvar expedition. For “Location” see Fig. 1a. Bottom temperature, salinity and additional macroalgal species were recorded during the Hvar expedition. Names of additional species (as reported by Ercegović 1960) have been updated according to current nomenclature (Guiry and Guiry 2015). “n.v.” not visited, “–” no data 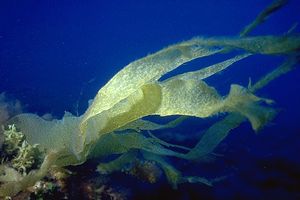 Herbaria
Ten historical and two recent specimens of L. rodriguezii collected in the Adriatic Sea have been deposited in herbarium collections (Table S2). Eleven of them were collected from Palagruža (Fig. S1A) while for one there are no data on the collecting site.

Expedition Hvar, 1948–1949
Using trawl net and dredge, L. rodriguezii was collected on 12 different transects mostly in the Jabuka and Palagruža and one near Biševo (Fig. 1), at depths between 130 and 260 m (Table 1). The abundance of collected specimens was not provided.